Home News World An American man drove 80,000 coins in a trailer and fell to...

Chinanews, June 15th According to comprehensive reports, a divorced father in Virginia, USA, showed his daughter his worst side last month. He drove a small trailer to transport 80,000 coins (800 US dollars) to the door of his ex-wife’s house, and dumped them on the lawn, using this cathartic method to pay for the last support of his 18-year-old daughter. 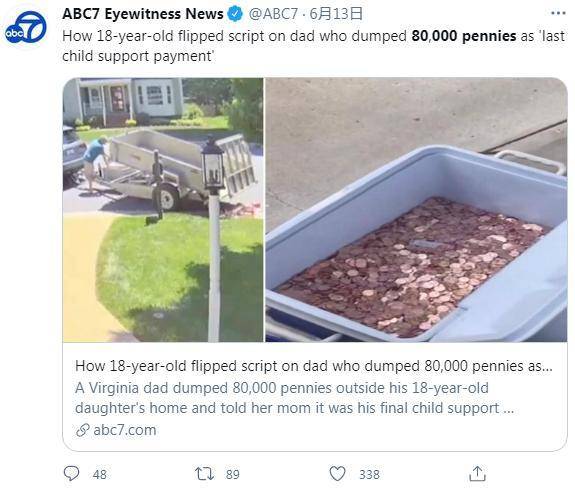 According to reports, the incident occurred shortly after the girl Avery Sanford turned 18. The video at Sanford’s home showed a man driving to where Sanford and her mother lived. A small trailer was pulled behind the car. He slowly raised the trailer body and dumped a pile of coins on it. On the road next to the lawn.

Sanford said her mother did not expect to receive a pile of coins for child support, and when her father showed up with the trailer, the mother did not immediately recognize him. “She didn’t know who it was until he shouted,’This is the last child support payment!'”

When Sanford came home from school, he found that the coins were still on the way. Sanford said that she and her mother were shocked and injured by the incident, but they quickly decided to donate $800 to a local shelter for domestic violence victims. With the help of her friends, she collected all the coins, then packed the coins with her mother and donated every penny to the “safe harbor”. Sanford said: “Donating this money to moms and children in need, I think it really makes this situation positive.”

According to the “Safe Harbor” shelter, Sandford and his mother’s actions moved many people, and more and more people began to donate to the shelter, with a total of more than 5,000 US dollars.

The “ex-husband” who dumped the coins later also accepted a telephone interview with the local media. He said that his actions were the result of frustration accumulated over the past 18 years, and “his emotions controlled him. He also said that the last thing he wanted to do was to further alienate him from his daughter.

Sanford said that she hadn’t spoken to her father for several years, and his father’s recent actions only proved that she was right to delete him.

She said: “When you do something like this, it’s really hurtful for your child.” “No matter how old your child is… the behavior of your parents will always have some impact on you.”

Bình Giang - April 24, 2021 0
On April 23, former US President Donald Trump criticized South Korean President Moon Jae-in for breaking off with the US, but he continued to...