Mars has been watched by ancient people in the sky for thousands of years, and now, even with modern astronomical instruments, the ‘Red Planet’ is still a mysterious object that constantly urges us. research.
CHANNEL OF THE ALTERNATIVES 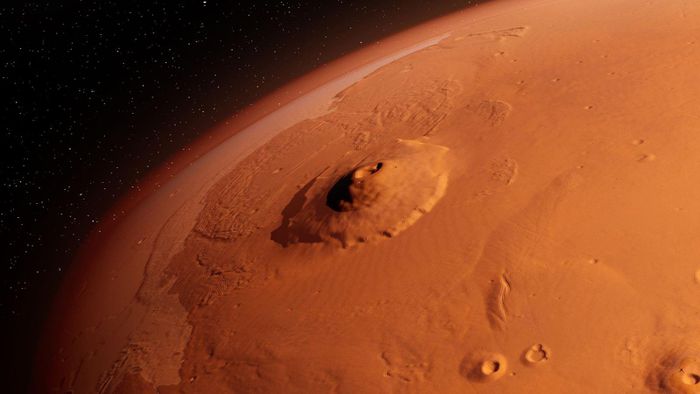 Mars hides the secret of life, always urging people to explore. Photo: NASA Today’s Earthlings are perhaps the most curious generation about the possibility of alien life on Mars, and are always wondering how humans might one day colonize there. From theories about Martian canals to alien radio messages, over the past three centuries, mankind has been constantly thinking about life on Mars. approach to his Martian “brothers”. Mars often appears in ancient texts as a “fire star,” or represents the god of War. In the 17th century, new early telescopes allowed scientists to get a glimpse of the Red Planet. Skilled “channel engineers”? Scientists need more powerful telescopes to be able to see up close, thereby trying to better clarify the hypothesis of life on Mars. In 1877, Italian astronomer Giovanni Schiaparelli noticed crisscrossing lines covering the “Red Planet”. He called these lines “canali”, which means “canal”. Schiaparelli himself does not believe that this is an alien product, but some others are sure of it.

Giovanni Schiaparelli’s map of the “canal” system on Mars. Image: Wikimedia Commons As information spread, the word “canali” was translated into English as “canal”, meaning “canal”. And if there were canals, wouldn’t that suggest that aliens would have to dig them? With that argument, many people believe that the interlaced lines on the surface of Mars are a beautiful system of waterways spreading across the planet.. Such a system not only shows that Martians exist, but that they are also amazing engineers. On Earth, it took man 10 years to complete the Suez Canal in 1869. The achievements of the Martians therefore seem to be far superior to those achieved by man. Astronomer Percival Lowell certainly thought so. In 1894, this American scientist-businessman began to expand the concept of a “canal” on Mars. Lowell used his family’s large textile fortune to open the Lowell Observatory in Flagstaff, Arizona, USA.

Professor Percival Lowell works with a telescope invested by his family. Image: Wikimedia Commons Percival Lowell mapped the “canals” on Mars with the help of the 24-inch Alvan Clark & ​​Sons refracting telescope he set up at the Lowell Observatory. He made meticulous maps of what was observed on the surface of Mars, wrote many books and regularly gave lectures on his shocking theory that Martians existed and that they were trying to irrigate the planet. their dying elf. Percival Lowell offers logical explanations to answer the question of how and why life exists on Mars. He used the example of life on Earth to illustrate his arguments: “As long as it was proved with certainty that no life could exist on the seabed, dredgers deep sea beds were invented, and before long, they ‘frustrated’ us. Behold, they see full of life. Fish, crustaceans, molluscs and echinoderms. In short, the life of all common floating fish, from protozoa to marine ‘monsters’ – have been found living in the depths of the seabed. What is impossible, turns out to be possible.” But mapping Mars is one thing, and soon scientists are looking for ways to make contact with any life that might exist on the planet. “Message” from the Red Planet In 1899, Lowell’s theory of life on Mars received a “kick” from a prominent scientist: Nikola Tesla. Tesla, then a successful electrical engineer, claimed that he had detected an “inexplicable, faint” signal originating from Mars.

Portrait of Nikola Tesla circa 1890. Photo: Wikimedia Commons While conducting experiments with his magnifier at high latitudes atop Pike Peak, Colorado Springs, Tesla claimed that he received “a message from another world, unknown and far away. “. What does that message say? According to Nikola Tesla, it is simply: “ONE – TWO – THREE”. A few years later, on a February 1901 day, in an interview with Collier’s Weekly, inventor Tesla announced that he could communicate with Martians by sending wireless messages to any point. on the “Red Planet”. This is a strange statement, because the successful transmission of radio messages on Earth has only become a reality since December of that year. Tesla doesn’t know what the aliens might look like, but he believes they have adapted to living conditions on Mars. Like Lowell, he suggested that “it is possible that in a frozen planet, such as the presumed conditions on our Moon, intelligent beings could still reside, within it, if not within it. on the surface”. To many people, when humans can receive messages from Mars, we can also send messages, that seems reasonable. In 1909, there were attempts to find a contact with life on Mars. Harvard professor William Henry Pickering proposed sending planetary light signals through a series of reflections produced by a network of 50 giant mirrors. The flashes would continue to flash for several years, allowing the Martians time to develop the necessary means to respond.

Professor Pickering’s giant mirror illustration for sending signals to Mars. Photo: Library of Congress “In the hope of receiving such signals again, we must of course assume that Martians, if they exist, have telescopes, eyes, etc., just like humans have on this Earth.” Mr. Pickering said. But the Harvard professor’s plan cost $10 million, and no one wanted to fund it.

Anti-landslide in Hoi An: Balance nature with ecological embankment