The preservation of biodiversity and rational exploitation of resources from the sea has been identified by Ninh Thuan province as one of the priority tasks in the socio-economic development strategy. 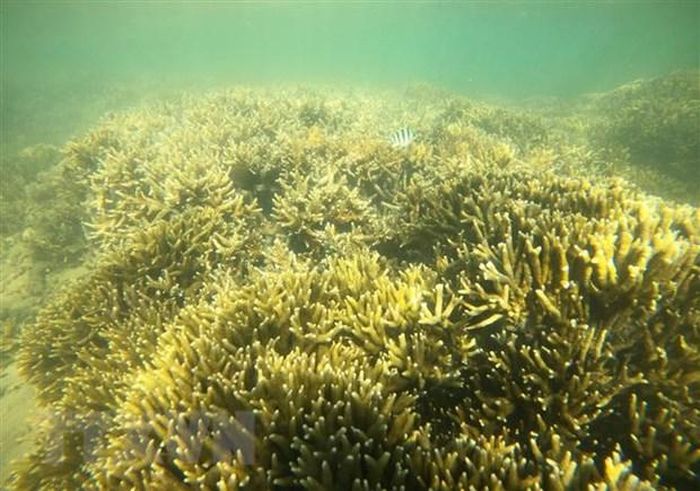 Coral reefs in the sea area of ​​Phan Rang-Thap Cham city. (Photo: Nguyen Thanh/VNA) Ninh Thuan waters have high biodiversity with hundreds of marine species of economic and conservation value. For sustainable development, the preservation of biodiversity and rational exploitation of resources from the sea has been identified by Ninh Thuan province as one of the priority tasks in the socio-economic development strategy. Rich in biodiversity potential Ninh Thuan has a coastline of more than 105km and a territorial sea of ​​over 18,000km2. According to the latest studies on biodiversity by the provincial Department of Natural Resources and Environment, in the waters of Ninh Thuan, coral reefs and the diversity of coral reef organisms are one of the most important components of the environment. Biodiversity most prominent. Scientists have recorded 6 coral reefs with an average coverage of about 42.6%. The coral reef has been identified with over 334 species belonging to 15 families, 59 varieties of reef-forming corals, of which 46 species have been newly recorded and added to the list of coral species in Vietnam. Coral reefs are home to many species of creatures, including coral reef fish with 147 species belonging to 81 genera, 32 families. Seagrass beds were also identified with 5 species distributed on the coastal bottom with an area of ​​about 341ha. Biodiversity of Ninh Thuan sea area is also shown in the record of 538 fish species, including 146 pelagic fish species, 392 benthic fish species, of which 68 fish species have high economic value. In addition, marine species include 45 species of mollusks, 24 species of crustaceans, 13 species of echinoderms, and 22 species of polychaetes. Notably, the waters of Nui Chua National Park – Ninh Thuan are currently one of the few rare areas on the mainland in Vietnam with a population of sea turtles spawning every year, including: green turtles, tortoiseshell turtles. Regeneration of aquatic resources With the potential of valuable ecosystems and biodiversity, the conservation of marine biodiversity has always been of special interest to Ninh Thuan province. Over the past time, functional branches of the province have cooperated with research institutes, universities, domestic and foreign organizations to implement many topics, projects and research programs on biodiversity. such as: upgrade database – GIS about Coral reef and coastal ecosystems; develop a program for periodic monitoring of coral reefs in Ninh Thuan; survey typical marine ecosystems in Ninh Hai and Thuan Nam districts; restore mangrove ecosystems in Nui Chua and Dam Nai sea areas to protect and create a development environment for marine species. In particular, Ninh Thuan province established a marine protected area in Nui Chua National Park with a total area of ​​7,352 hectares. Nui Chua marine conservation area includes strict protection zones, ecological restoration areas and development zones with the function of protecting endemic and rare marine species in order to regenerate aquatic resources, protect and enhance the biodiversity of local marine protected areas. Mr. Tran Van Tiep, Deputy Director of Nui Chua National Park Management Board, said that over the years, the park has coordinated with domestic and foreign scientific research units and organizations to investigate and evaluate the potential, develop data on marine resources and environment within the conservation area to serve as a basis for implementing projects on environmental protection and restoration of marine ecosystems. Currently, the Park is implementing synchronously many plans and solutions to effectively and sustainably protect sea turtle populations and their habitats and other endangered and rare aquatic species. Specifically, the Park builds and maintains strict protection zones for sea turtles at spawning grounds in the area; building a turtle conservation station, establishing volunteer groups to participate in protecting sea turtles; at the same time, build a marine life rescue area to receive, rescue, treat, raise and train turtles in captivity, catch, and ensure sufficient conditions for turtles to live on their own before being released into the environment. nature. Simultaneously, the Nui Chua National Park Management Board has promoted propaganda measures to raise awareness and knowledge of the community about the importance and value of marine biological resources. From there, creating consensus, support and active participation of local people in protecting the marine ecosystem and environment, Mr. Tran Van Tiep added. In order to protect, regenerate and develop aquatic resources, Ninh Thuan province has been implementing many measures to manage, propagate and organize fishing in the right season, using the correct net size as prescribed. exploit the right route, do not use toxic chemicals, explosives, electric pulses to exploit. At the same time, the province deducts a part of the local budget and mobilizes businesses to release millions of tiger shrimp and fingerlings into the sea to regenerate and supplement seafood resources. Particularly in 2021, Ninh Thuan has organized to release 700,000 tiger shrimp seed into the sea to regenerate aquatic resources for local waters. Improve efficiency of management and conservation Through the assessment, the conservation of marine biodiversity has been better protected by all levels and sectors, but like coastal localities in the country, Ninh Thuan’s marine biodiversity is currently under pressure. face many challenges. It is the decline of biodiversity and fishery resources, aquaculture activities, and waste that make some marine areas at risk of pollution, climate change is causing pressures. significant contribution to the conservation and development of local marine biodiversity. 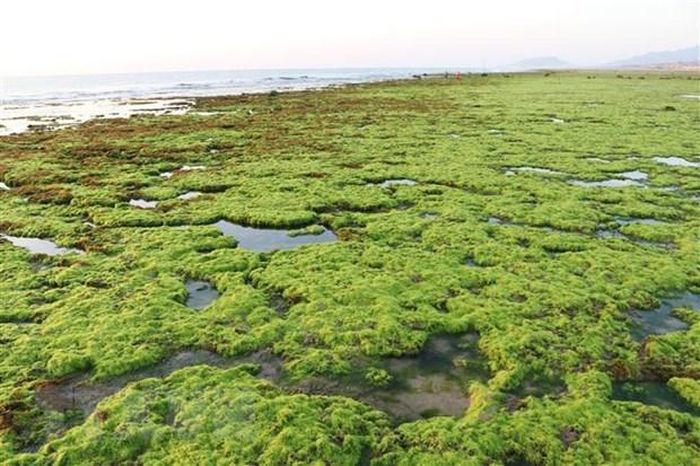 Seaweed covers a large coral reef in Phuoc Dinh commune (Thuan Nam district). (Photo: Nguyen Thanh/VNA) According to Chairman of the People’s Committee of Ninh Thuan province, Tran Quoc Nam, identifying biodiversity resources in general, especially marine biodiversity resources, is of great significance to socio-economic development. Every year, Ninh Thuan integrates the task of environmental protection and biodiversity conservation into the province’s general socio-economic development plan. In order to improve the efficiency of biodiversity management and conservation, the Provincial People’s Committee assigned the Department of Natural Resources and Environment to coordinate with agencies and units to periodically observe, analyze and evaluate the current state of the environment. annually and once every 5 years to create initiative for the development of orientations on environmental protection policies in the whole province. Regarding biodiversity conservation in general, marine biodiversity conservation in particular, in the coming time, Ninh Thuan will continue to develop mechanisms and policies to attract resources from the central and local governments. implementation of investment programs and projects in order to improve the operational efficiency of marine protected areas. The province promotes scientific research, basic investigation of marine resources and environment; focus on biodiversity conservation, restoration of Ecosystem , especially coral reefs, seagrass beds, mangroves, coastal protection forests. At the same time, Ninh Thuan improves its capacity to respond to marine environmental incidents, actively propagates people living in coastal areas not to discharge domestic waste and plastic waste into the sea, actively collect clean the marine environment to prevent and minimize risk factors that may affect the development of marine organisms.

What is the heavy water in a nuclear reactor, is it...

editor - May 6, 2021 0
There are always some weird questions in the world, such as is heavy water drinkable, and what does it taste like? What is heavy...