The mark of more than half a century of Z131 military soldiers, of the 31 Electromechanical and Explosives One Member Limited Liability Company is the brand position, the prestige of a defense unit before the military, partners. With bravery, creativity and innovation, Z131 Factory has made a journey worthy of the title of twice Hero.
Affirming position, brand

Born and raised in the great national resistance war of the nation, military soldier Z131 did not manage hardships and sacrifices, producing weapons to fight the enemy. Anti-tank bullets B40 penetrated concave, grenades, mines, … branded Z131 that day was forever the pride of Factory Z131 of Vietnam’s military industry. Stepping out from the battlefield of fire flowers, the soldier stiffly accepted the challenge, while continuing to carry out political tasks in the new period, while participating in the marketplace with all his inner strength. “Walking on two feet” has become the strategic direction of Z131 Factory’s development over the years. 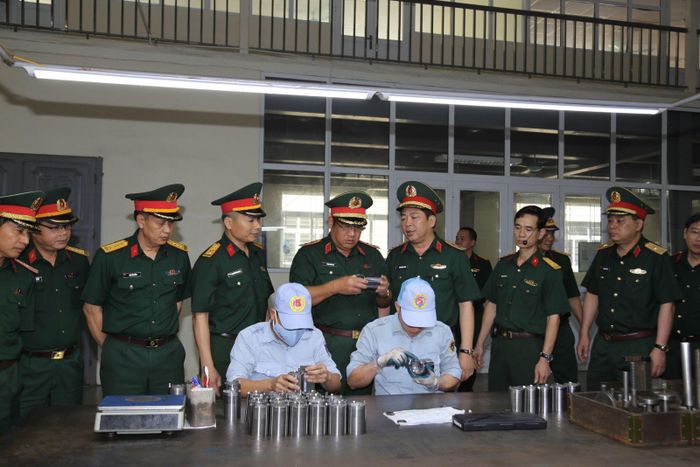 Vice Admiral Pham Hoai Nam – Member of the Central Committee of the Party, member of the Central Military Commission, Deputy Minister of National Defense visits to inspect production at factory Z 131 (April 2021) From the point of view of combining national defense with economy, economy with national defense; Besides the task of defense production, the factory has promoted the development of economic production by paying attention to investing in equipment, equipment and applying advanced technology to production and economic goods. Typical are high quality emulsion explosives line, export mechanical line and auxiliary products; chromium-nickel plating lines, pressure casting, automatic painting, robot welding… As a result, the factory has boosted production with many valuable products to serve the national economy. In which, product groups such as industrial explosives, precision mechanics; products, tools, barracks; defense educational products (such as weapon models, teaching aids). On average, annual revenue from economic production accounts for 40-50%, many products are competitive in domestic and export markets. In which, mechanical products serving the fire prevention and fighting industry have approached the Korean and European markets; precision mechanical products have been exported to Denmark, USA,… It is difficult to imagine the whole process of change in the Z131’s appearance in the years of fire, the years of innovation and the present day. From the mindset of enterprises making long-standing weapons with a new market value, low competitiveness; Factory Z131 has risen to become one of the dynamic units, pioneering innovation and integration. The modern management model and method suitable to the characteristics of a defense manufacturing factory have been successfully applied by the factory, creating resilience and a foundation for businesses to go as far as ISO quality management system. 9001: 2015, environmental management according to ISO 45001:2018 and ISO 14001:2015; methods “5S”, “Kaizen”, labor performance assessment, application of information technology in management activities, automation in production… 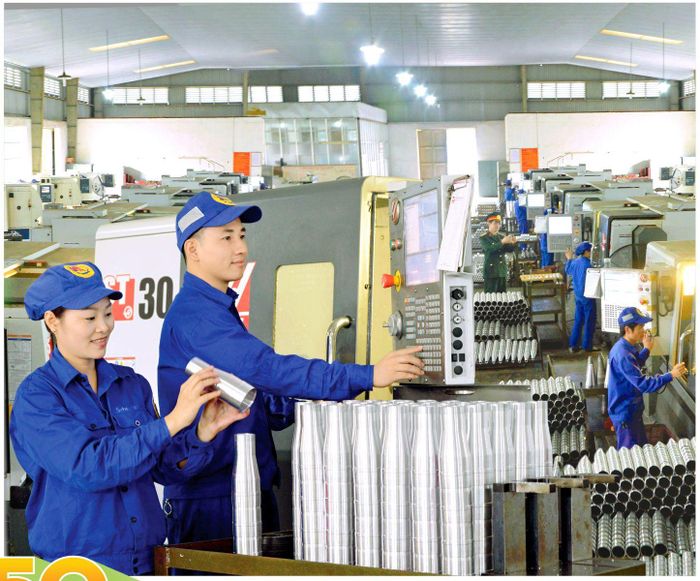 Mechanical production at factory Z131 Change thinking, change the way of doing, innovate yourself from within the development needs of the unit. That change is implemented and connected through each development stage, creating a journey of more than 5 decades of thinking and creativity, bravery and solidarity. Each step of the Z131’s development has witnessed times of “crossing the dance floor” to break through, to assert itself. Nearly three generations of Z131 military soldiers have been strong and resilient, creating the typical brand of the Army’s typical anti-tank weapon factory; creating a new face, a big corporate brand of the General Department of Defense Industry. Heroes in the Resistance War, Heroes in Labor and Production, Z131 Military Soldiers, Z131 Factory has affirmed its brand and position in the lineup of military enterprises, always keeping a proactive attitude to change. new, integrated. Step into the future More than half a century of construction and development of Z131 Factory is a journey with much enthusiasm, effort and sacrifices, ups and downs… Today’s achievements are crystallized from years of age and wisdom. of the generation class of military soldiers Z131. At the mark of 55 years of tradition, Colonel, Dr. Nguyen Hong Son, Director of Z131 Factory had emotional sharing that: Having a Z131 Factory like today, we understand more and more the power of the two words “traditional”. I always think, tradition is like a flow, connecting generations who have joined hands to build the Factory. 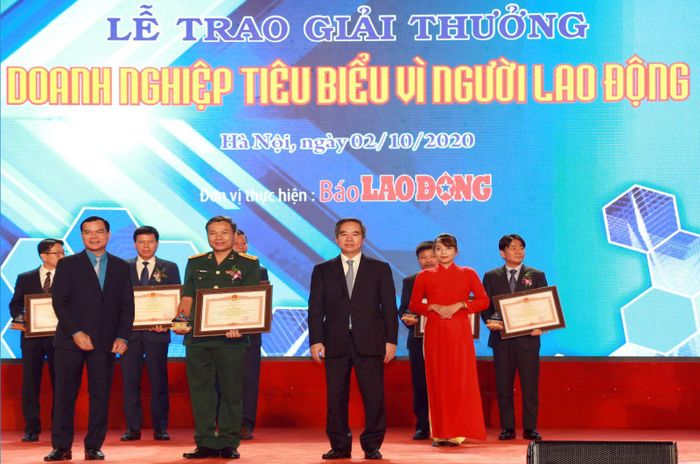 Colonel, Dr. Nguyen Hong Son – Director of Z131 Factory received Certificate of Merit from the Prime Minister for Z131 Factory – Typical Enterprise for Employees (October 2020) Along with the good traditional values ​​of the Vietnam People’s Army, the tradition of the Military Military – Heroic Army, Z131 Factory has built and cultivated the traditional value of Z131, which is summed up in 18 words. : Solidarity, affection, initiative to overcome difficulties, dynamism, creativity, well completion of all tasks. That soft power has been contributing to creating more motivation, arousing pride so that the factory employees today are excited and confident in building the unit to continue to develop firmly in the new period. Taking over the Z131 Factory at a special milestone, it seems that with Colonel, Dr. Nguyen Hong Son also has a good predestined relationship. With his teammates, he made a mark of 45 years at a leading military scientific research institute; experiencing special moments in the development process of the unit, perhaps he understands better than anyone the weight of tradition, the responsibility of the present and the future. The reputation of the unit, the honor of soldier Uncle Ho put on the shoulders of Z131 soldiers today, on the shoulders of the leader, Mr. Firmly moving forward – that determination is concretized by actions, by burning enthusiasm in the soldier’s heart. Practice has answered the question of why, for many years, the factory has always been in the top of the General Department of Defense Industry in implementing the emulation movement. That requires executive managers to be more closely, dynamic, innovative, creative and drastic. Trying to effectively use all resources so that the factory always has growth, that is really a big pressure. Nearly 30 years of working closely with the explosives and ammunition industry; once led the industry’s leading Military Scientific Research Institute to successfully pilot the model of partial financial autonomy,… All of that experience and thinking of a scientist doing business, his bravery in the army. Mr. Ho in the new era, Colonel, Dr. Nguyen Hong Son determined to steer the Z131 boat firmly forward, the factory determined to focus on leading and directing to successfully complete production and business tasks. , achieving an average revenue growth of 6% or more; added value of 8% or more; average income increased from 6-8%. The factory strives to achieve revenue of over 2,100 billion dong by 2025; job security and an average income of 18 million VND/person/month. 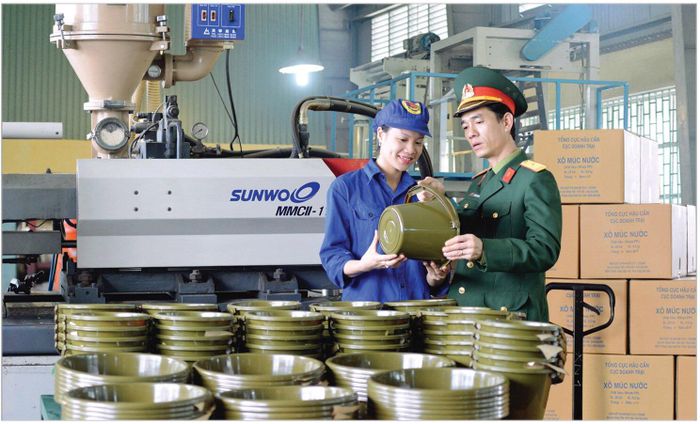 Plastic products are produced at factory Z131 In which, continuing to invest in renovation of equipment and equipment in the direction of dual-use defense and economy, especially export mechanical production lines and auxiliary products. At the same time, make the most of and exploit the maximum efficiency from defense production to fulfill economic orders for domestic and export markets. The strategic objective of the factory is to strive to build the unit to become the center of the North’s defense industry, capable of researching and developing high-tech weapons to serve the Army and the country. At the age of 55, Z131 Factory is firmly in a new position of a defense enterprise ready to reach out to the big sea. Uncle Ho, who was only used to making guns and bullets, is now completely confident on the negotiating table, on transactions and economic contracts. Soft skills that are equipped and applied with ease, plus the status of a military enterprise have created a special reputation for the Z131. They have made a proud part of the Military Industry, of the heroic Vietnamese army. Honored and proud, the mark of more than half a century of the Z131 Factory has the anti-American epic, the modern epic and the dynamism of changing to keep up with the times.

editor - June 10, 2021 0
Recently, Facebook users stirred when there were many fake links of Coca-Cola beverage brand. Notably, when clicking on this link, the Facebook account is...