The biggest football governing body on the planet was impressed with the surprise named Vietnam team, when the boys in red just created a new historical milestone for the country’s football, with the first record entered the third qualifying round of a World Cup. 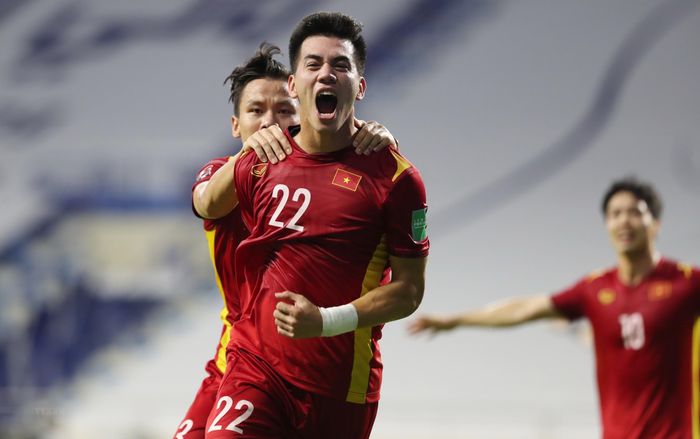 The history-making journey of the Vietnamese team has resonated in the international arena. (Photo: VNA) The biggest football governing body on the planet was impressed with the surprise named Vietnam team, when the boys in red just created a new historical milestone for the country’s football, with the first record entered the third qualifying round of a World Cup. The impressive journey in the 2022 World Cup qualifiers in Asia for coach Park Hang Seo and his students has ended. The Golden Star warriors held their heads high to win tickets to the 3rd qualifying round after a brave match against the UAE in the last match of Group G. Despite losing close to 2-3 buttons, the red army still showed their fighting spirit fight to the end to assert their position in the continental playing field. In the summary of the second qualifying round of the 2022 World Cup in Asia posted on the FIFA homepage, the most powerful body of world football has given the Vietnamese team many compliments. “Thus, the second qualifying round of the 2022 World Cup in Asia has closed the curtain, identifying 12 names to officially enter the 3rd round after the final round is over. Vietnam is the biggest surprise with winning the right to go on to the third qualifying round”, the FIFA article has a paragraph. Attached to the title of the article describing the historical victory of the Vietnamese team, FIFA also chose to post a representative photo for its article, an image of striker Nguyen Tien Linh celebrating a goal with his teammates. This is really a great honor for Vietnamese football to be selected to represent the whole continent’s 2022 World Cup qualifying campaign, and to help convey information about Vietnamese football to millions of people. football fans around the world.

Information and images about the Vietnamese team proudly appear in FIFA’s articles. (Screenshots) After finishing an impressive journey in Group G, the Vietnamese team passed the second qualifying round as one of the five best runners-up in the group. According to FIFA’s assessment, this is a breakthrough for Vietnamese football. “The third qualifying stage saw the arrival of Vietnam, the team that just made history when it entered the third round for the first time. After reaching the quarterfinals of the Asian Cup 2019, the Vietnamese team continued to make progress in the continental arena under coach Park Hang Seo. Entering the final stage of the second qualifying round of the 2022 World Cup as the top team, Vietnamese players have won consecutive victories over Indonesia and Malaysia, and finished as one of the best runners-up. best, although they lost to host UAE with a score of 2-3 in the last match,” FIFA wrote. One of the players who made an important contribution to this historic feat is Tien Linh, who has consecutively scored in all three matches of the Vietnamese team in the UAE. FIFA’s article also devoted a whole paragraph to praise the striker of the Vietnamese team. “Many good players have shone in their journey to help their team pass the second qualifying round. Notable among them is 23-year-old striker Nguyen Tien Linh, who has scored four times, including a goal. won to set the score in the first leg against the UAE, helping our team achieve breakthroughs”, according to FIFA. Despite losing close to the UAE in the last match of Group G, our team still made a new miracle under coach Park Hang Seo. For the first time in the third qualifying round of the World Cup, Mr. Park’s students will join Japan, Korea, Australia, Iran or Saudi Arabia to compete in the group of 12 strongest teams on the continent. According to a notice from FIFA, the draw for the third qualifying round of the 2022 World Cup in Asia will be held on July 1. The 12 Asian teams will be divided into two groups, each consisting of six teams. The third qualifying round is expected to take place in seven months, starting on September 2 of this year and ending on March 29, 2022. After the third qualifying round, the top two teams in each group will qualify for the 2022 World Cup finals in Qatar. The two 3rd place teams will face each other in the 4th play-off round for a place in the intercontinental play-off.