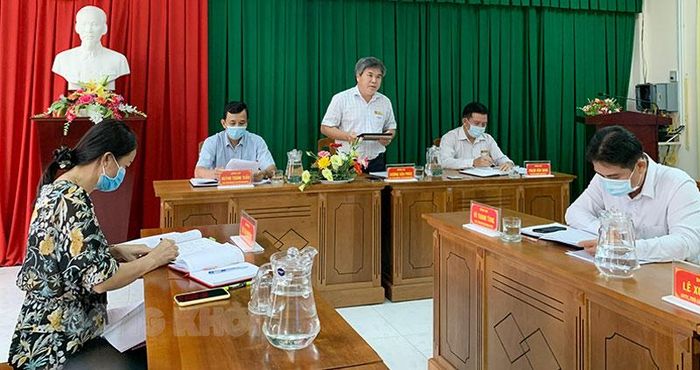 Chau Thanh District Party Committee Secretary spoke at the monitoring session. (Photo: P. Snow) On June 15, 2021, the delegation 168 of the Ben Tre Provincial Party Committee led by Standing Vice Chairman of the Ben Tre Provincial People’s Committee Nguyen Truc Son had an online meeting with the Standing Board of the District Party Committee and the Secretary of the Chau District Party Committee. Thanh on leading and directing the implementation of the New Rural Development Program (NTM) in Ben Tre province in the period of 2020 – 2025, with orientation to 2030 (Program 09); Provincial tourism development project to 2030 (Project 02). Reporting at the conference, a representative of Chau Thanh district’s leadership said that Chau Thanh district directly, focused on leading and directing the implementation of tasks and solutions to accelerate the construction of new rural areas and develop tourism in the region. district area. Regularly invite and mobilize investment resources to develop infrastructure in service of socio-economic development, contributing to building new homes and developing tourism. Along with that, Chau Thanh district directs the planning of the district area; adjusting and supplementing the rural rural planning in communes. Regularly monitoring, drastically directing to speed up the works, construction progress of the works; at the same time, direct district departments and branches to pay attention to supporting communes in organizing the implementation, to fulfill the criteria for building new rural areas; develop and implement a learning plan for the community tourism model under the motto of “learning by example, catching up with the typical, overcoming the typical” of the new Dong Khoi emulation movement, according to Directive No. 01-CT /TU of the Standing Committee of the Provincial Party Committee; planning the resort resort of Qui and Tan My dunes to invite investment in tourism development. The district organized a thorough understanding of Program No. 09-CTr/TU and Project No. 02-DA/TU of the Provincial Party Committee for key officials of the district; promulgating Plan No. 32-KH/HU dated 16-12-2020 on mastering the Resolution of the 11th Provincial Party Congress, term 2020-2025. In order to implement Program 09 and Project 02 to achieve results in the near future, on behalf of the monitoring team, Standing Vice Chairman of Ben Tre Provincial People’s Committee Nguyen Truc Son suggested: Chau Thanh cares deeply and thoroughly in the system. Politicians and people understand clearly and specifically about programs and projects. Accelerate and complete the district’s New Rural Development Project, pay attention to focus on building advanced rural villages, model new rural areas, building new rural areas in parallel with urban development. With its advantages and potentials, the district needs to choose a focus and focus to develop a type of tourism that creates its own highlight for Chau Thanh tourism, and soon completes the tourism infrastructure system along the Tien River. Interested in investing in major infrastructure routes of the province in the district.

Unleash the power of the people