China News Agency, Beijing, June 15 (Reporter Xing Chong) In response to the NATO summit, a communiqué stated that China poses a so-called “systemic challenge.” Chinese Foreign Ministry spokesperson Zhao Lijian refuted it at a regular press conference on the 15th. He stated that engaging in “small circles” and group politics, ideological sidelines, and forcing other countries to choose sides between camps, goes against the historical trend of peace, development, and cooperation, and is destined to be unpopular and unsuccessful. 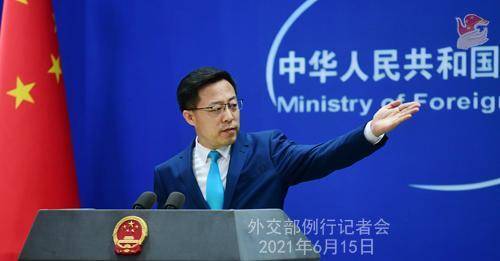 The spokesperson of the Ministry of Foreign Affairs Zhao Lijian.Photo by Xue Wei

A reporter asked questions that day. The NATO summit was held in Brussels and issued a communiqué stating that China poses a “systemic challenge” to the international order and NATO security-related areas. What is China’s comment?

Zhao Lijian responded that there is only one system and one order in the world, that is, the international system with the United Nations as the core and the international order based on international law. Engaging in “small circles” and group politics, engaging in ideological sidelines, and forcing other countries to choose sides between camps, goes against the historical trend of peace, development, and cooperation, and is destined to be unpopular and unsuccessful.

“On the one hand, NATO calls on its member states to increase military expenditures, requiring them to reach or exceed 2% of GDP. On the other hand, they make irresponsible remarks about China’s normal national defense and military modernization. This is a typical double standard.” Zhao Lijian pointed out that, in fact, China’s defense GDP accounts for about 1.3%, which is far less than NATO’s own “pass line.” China’s per capita military expenditure is lower than the global average and less than one-fifth of NATO’s.

Zhao Lijian emphasized that NATO’s history is full of misfortunes, and he owes a lot of debts, bringing wars and turbulence to the world many times. The international community will never forget that NATO carried out 78 days of indiscriminate bombing of Yugoslavia without the approval of the United Nations. NATO countries such as the United States and the United Kingdom used only a bag of laundry detergent and posing video as “evidence” to launch wars against sovereign countries such as Iraq and Syria.

“We Chinese will never forget the historical tragedy of the bombing of the Chinese Embassy in Yugoslavia. This is a blood debt owed by NATO to the Chinese people. China will not pose a’systemic challenge’ to anyone. We will firmly defend our sovereignty, security, and development. Interests.” Zhao Lijian said. (Finish)

Israel investigates the Syrian missile crash near the reactor

UYÊN LÊ - April 23, 2021 0
Israel has launched an investigation to find out why an air defense system could not shoot down a Syrian missile that landed near its...