Home Science River of boiling water at 97 degrees Celsius in the Amazon rain...

The Shanay-Timpishka, also known as La Bomba, a tributary of the Amazon River, is ‘the only boiling river in the world’. The river is 6.4km long, known for its very high temperatures in its water, ranging from 45 degrees Celsius to 97 degrees Celsius, almost 100 degrees Celsius. Geothermal scientist Andrés Ruzo studied this heat source and wrote book ‘The Boiling River: The Adventure and Discovery of the Amazon’. 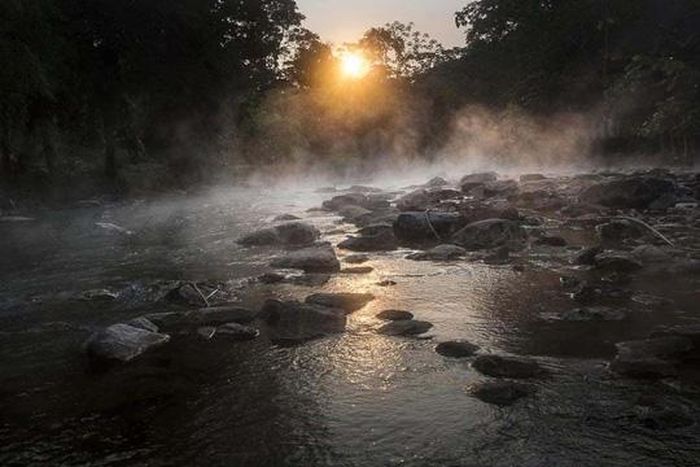 Boiling River. Boiling River Our understanding of the history of the Boiling River (as it relates to humans) comes from two primitive sources: local Amazonians and oil field documents from the early stages of oilfield development. Agua Caliente. 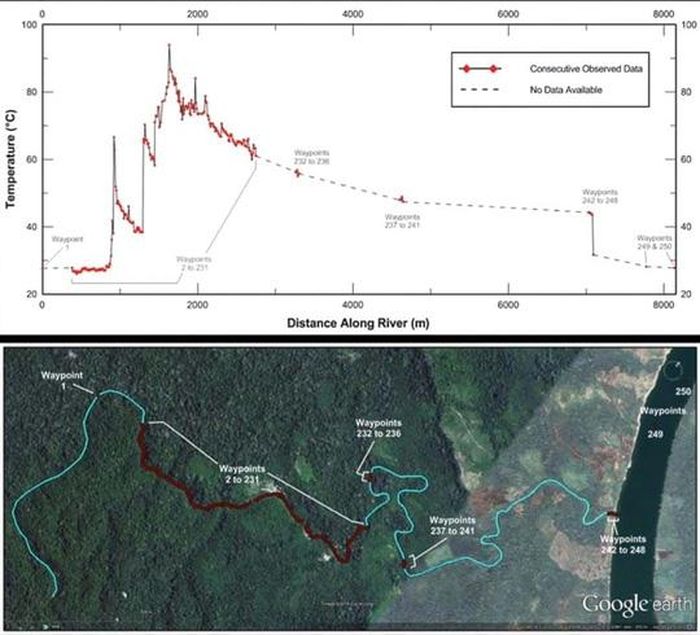 Map of the boiling regions of the Soi River, up to the range of the Boiling River merging with other rivers. Ancient history According to tradition, locals say that the Boiling River has existed since “before the days of the great-grandfathers and nuns”. The ancient name of this river is “Shanay-timpishka”, which means “Boiling in the heat of the sun”, although the heat source is likely geothermal. This is a pretty interesting name for a variety of reasons. First, the name speaks for itself as a hypothesis, illustrating how the ancients sought to explain the world around them. Second, the name is in the Amazonian-Quechua dialect which may not be archaic, likely only a few hundred years old. There is certainly a deeper history to explore, and more research will be done to truly understand what the Boiling River meant to the ancestors of the Amazons. 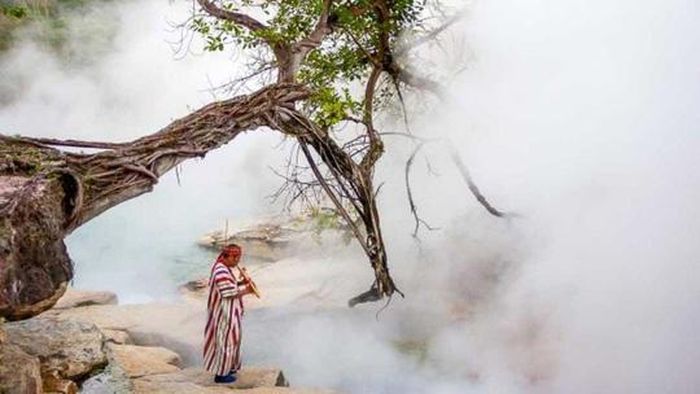 Mr. Maestro Juan Flores, shaman of Mayantuyacu, Peru, Boiling River According to Mr. Maestro Juan Flores, shaman of the Mayantuyacu region, Peru, the Boiling River has always been considered a place of great spiritual power. In the past, locals were still afraid to go into the forest of the Boiling River, especially the Mayantuyacu area, in the province of Puerto Inca, western Peru because the jungle is home to very powerful spirits, and There are even man-eating leopards. As a result, only the most powerful magicians (some of whom are ancestors of Mr. Maestro Juan) often visit the river to live with the spirits and learn the art of healing from the spirits. Westerners come to the river In the late 1920s, Peru was looking to expand its Amazon region and better connect with cities like Pucallpa and elsewhere in the country. In 1929, American geologist Robert B. Moran conducted an aerial survey from an airplane for a railway construction project and discovered a large oval mound jutting out of the forest. He immediately identified this as a potential oil reservoir, claiming it to be a salt dome. 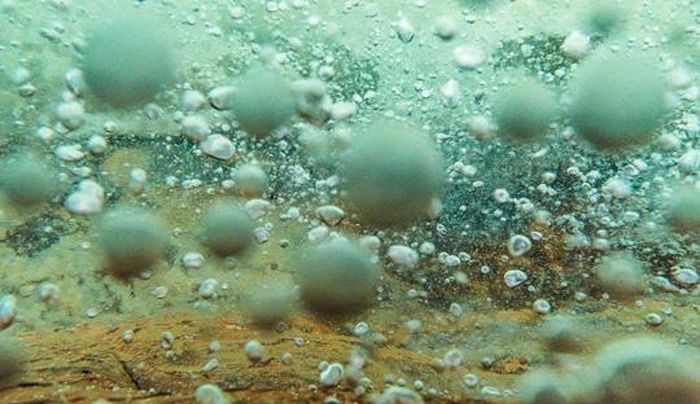 Below the River. Moran continued to organize field expeditions in 1930, 1931, and 1932. When Moran and his colleagues first encountered the Boiling River, they were concerned that the Agua Caliente Dome was a volcano, not a volcano. are sedimentary structures because geothermal systems can “cook up” oil reserves, rendering them worthless. Fortunately, they found layers of natural oil seeping into other parts of the area (not on the Boiling River) and determined that the river was not of volcanic origin. In their early maps, they referred to the river as “Shanaya” or “Shamaya”, a variation on the name “Shanay-timpishka.” In their accounts of the 1930s, Moran’s group said that “no more than 50 people lived in the area of ​​Agua Caliente”, and that most of them were “descendants of people who came to the area during the outbreak of rubber explosion”. The account also describes “there were a small number of Indians living in the main rivers, where they were rarely seen and their numbers were practically insignificant”. This is consistent with the shaman Maestro Juan’s description that only the most powerful of magicians go to the Boiling River, so few natives live there.

Take a sample of 97oC boiling water. We can only guess what the natives had to think, as the oilmen entered this dangerous land of powerful spirits. Finally, Moran and his team confirmed the potential of the Agua Caliente oil field, obtained a concession to develop and exploit the oil field, and in 1938 they successfully drilled the first oil well there. Amazon, in Peru. Over the next 80 years or so, the ownership of Agua Caliente passed through different oil companies. Currently, Maple Energy Company is exploiting this oil field. Since the early 1990s, non-Amazon native visitors have come to the Boiling River region from all over the world, visiting Mayantuyacu and Santuario Huistin for traditional healing. 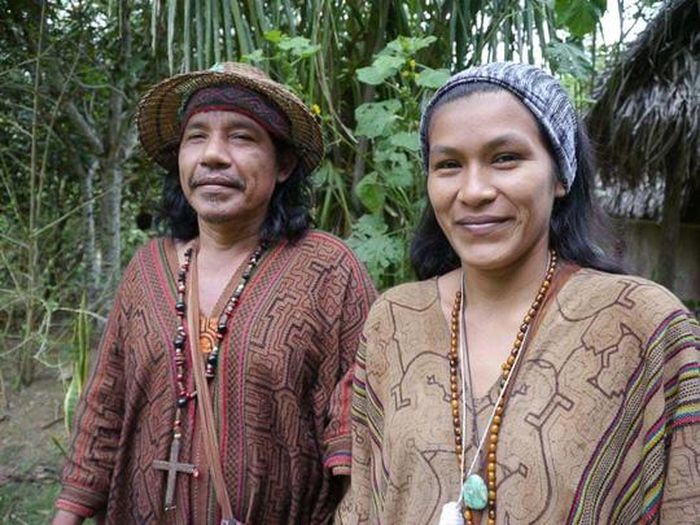 Magus Maestro Santiago Enrique and his wife. Shaman centers on the Boiling River A young shaman has just finished his studies to become a traditional healer and he visits the forest. While walking, he accidentally stepped into a hunter’s trap and was shot in the leg. He was taken to the hospital and the doctors told him he would never walk again. A nurse named Sandra challenged: “If you are a powerful magician, why don’t you heal yourself?” Remembering the stories his grandfather used to tell him about the powerful healing spirits present on the Boiling River, the young mage picked up his crutches and walked into the woods. 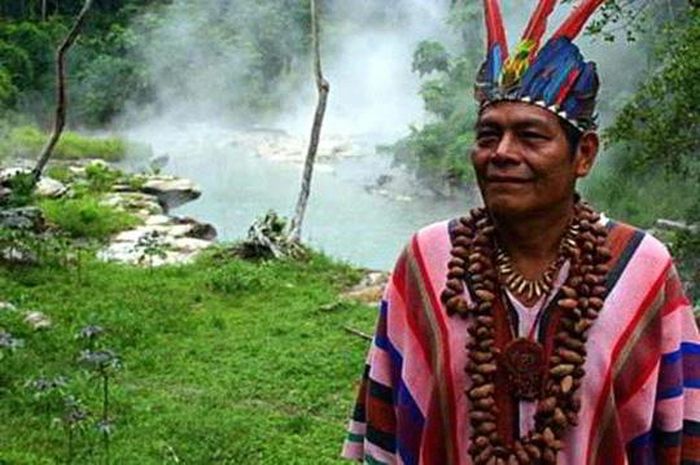 Maestro shaman Don Juan Flores. At the Boiling River, there was a Came Renaco tree that crossed over the Boiling River, its roots clinging to a rock and its branches submerged in the steam of the river. The young mage healed himself using the sap, bark and leaves of the Came Renaco tree along with the river’s water, and he was able to walk again. It was here that he later founded the healing resort of Mayantuyacu and began his journey like Maestro Juan Flores, or sheripiari Asháninka (healer, shaman). He married the nurse Sandra and together, they run the healing center, helping to treat tourists with ancient Amazonian remedies. Maestro Enrrique, shaman of the Santuario Huistin healing center, was originally a builder and tells how he accepted his call to become a curandero (male physician) after having a dream about the Virgin Mary in the forest. The Lady tells him to fold his tools and draw people to the rain forest to reveal its healing secrets to them. He obeyed and sought guidance from Maestro Juan Flores. After completing his training, he founded his healing center named Santuario Huistin on the Boiling River. Together with his wife Ayme, also a curandera (medicine woman) and shaman, they treat travelers with traditional Amazonian medicine. 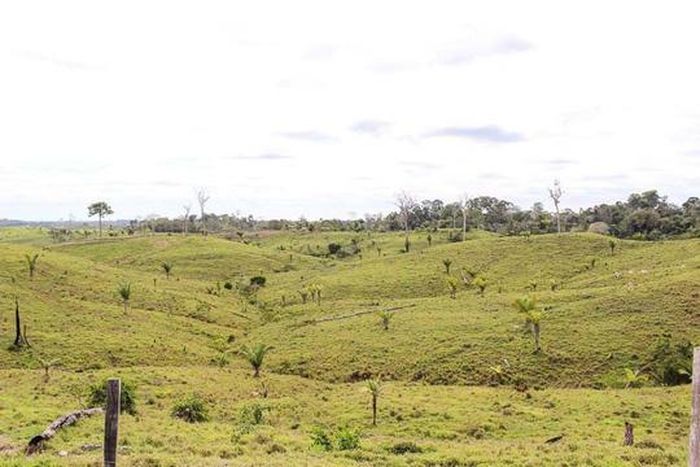 The rain forest around the Boiling River was destroyed. Why is it still a mystery? Before the oil field exploration and development program, the Soi River was a remote location known only to the locals. When the first oil field development began in the area, the rights and welfare of the indigenous peoples as well as the best for the environment were not taken into account. Moran’s accounts make it clear that the oil workers were initially troubled by the presence of the Boiling River in the area because geothermal systems could “swallow up” oil reserves, make them worthless. Fortunately for the oil miners, they found leaks of natural oil in the area (not in the Boiling River), and could see that the Agua Caliente dome was not a volcano. Although the Soi River was included in the original documents in the oil field rights document, it is reported only as a landmark, and as the original northern boundary of the oil field.

Andrés Ruzo sits beside the Boiling River. Over the past 80 years, the rules, regulations and requirements related to oil development in the Amazon (especially with regard to environmental and social issues) have dramatically changed things. From the original mining concession to the present day, it is certain that the Boiling River will be identified as an important cultural site. 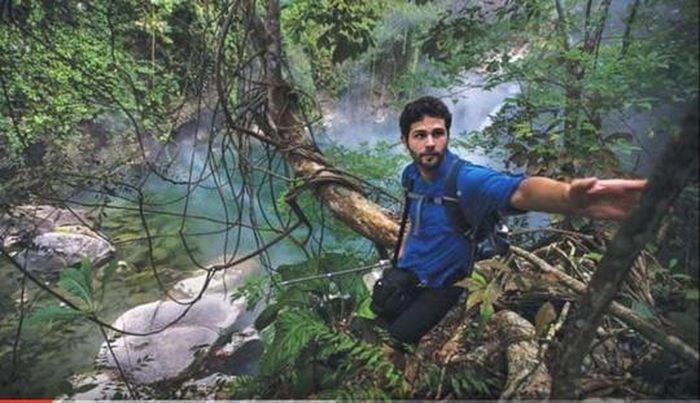 Geothermal scientist Andrés Ruzo. In 2011, the Peruvian geophysicist’s aunt, Andrés Ruzo, introduced him to the Boiling River, as she had been a visitor to the Mayantuyacu region. The concept of this landmark quickly became clear to Andrés Ruzo through preliminary tests that the river was of geological importance; While sharing his observations with Maestro Juan, Maestro Juan then decided to bless Andrés in the process of studying the sacred river. Then Maestro Enrrique also blessed Andrés. In doing so, they allowed him to become the first geologist to make a detailed study of the Boiling River. Since this time, Andrés Zuro has worked closely with both the Mayantuyacu and Santuario Huistin treatment centers to study the river, protect it, and in the utmost sense of responsibility they have brought it to the world. world.

Life may have originated from undersea volcanoes

editor - June 8, 2021 0
Much of the volcanic activity on Earth takes place at depths of several kilometers under the ocean. Our understanding of Earth's...