Home Travel 9 things tourists should do most when visiting the ‘place of the...

Lhasa, the capital of the Tibet Autonomous Region, is located on the northern bank of the Lhasa River in the Himalayas. The area is nicknamed the ‘Forbidden City’ because of its many sacred religious sites. Lhasa is translated as ‘Place of the Gods’.
Lhasa is also known as the “Sunshine City” because on average there are up to 8 hours of sunshine per day. It is one of the tallest cities in the world. Once the center of the Tibetan Empire for hundreds of years, tourists flock here year-round to explore the majestic hilltop fortress and ancient Buddhist temples, monasteries and pilgrimage routes. 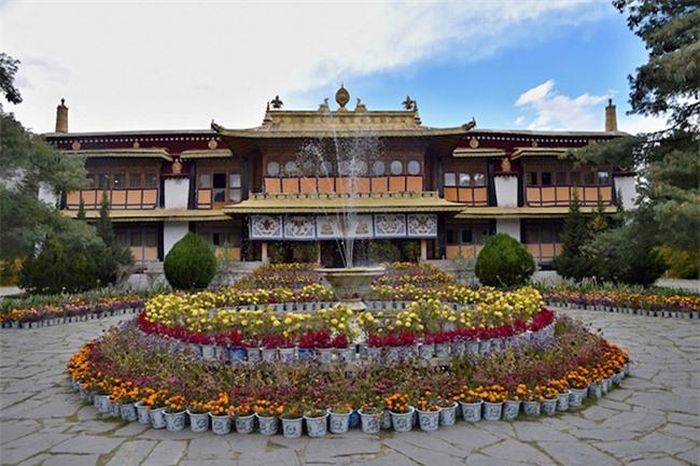 Norbulingka, which means “Treasure Park”, was once the summer palace of the Dalai Lama with many lakes as well as the tallest, largest and most beautiful gardens in the Tibetan plateau. Originally built with just a palace in the 1740s after the 7th Dalai Lama discovered the beauty of this wilderness and remoteness, after nearly 300 years and through many generations of the Dalai Lama Lama, the complex includes 5 palaces: Tsokyil, Kelsang, Takten Migyur, Golden Linka and Lake Heart. The palace has more than 370 rooms and 30,000 cultural relics to explore. Highlights include the Temple of the Dragon King, New Palace murals, Han-style pavilions, the Tibet Museum, and Norbulingka Zoo. Yerpa

Nestled on the slopes of Dagze, Yerpa is a series of ancient caves, temples and chapels carved into the limestone cliffs of the Yerpa Valley. These caves were very important in pre-Buddhist times and later became a meditation site for famous Buddhist figures such as Songtsen Gampo, Padmasambhava and Atisha. Today, the slopes are covered in multicolored prayer flags. Yerpa is mainly visited by Tibetan pilgrims, but the fresh air and rural landscape are well worth a visit. Tibet Museum 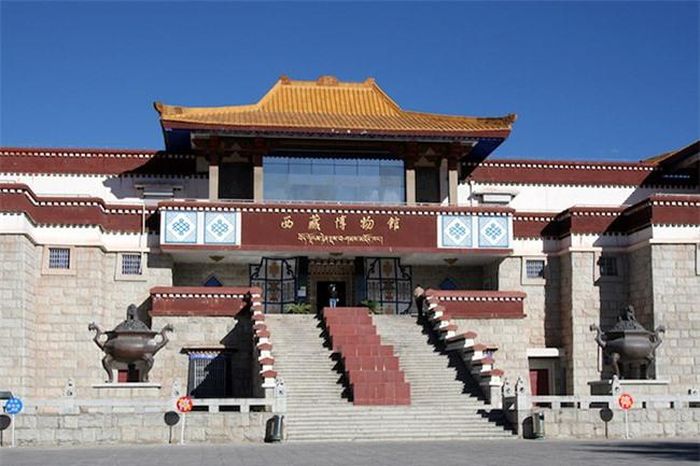 The Tibet Museum is the official museum and the first modern museum of Tibet. Housed in the Norbulingka Summer Palace, it houses more than 520,000 relics and antiquities, ranging from Chinese pottery to ancient Buddhist statues. Built in 1994 with typical Tibetan and Chinese architectural styles, the museum opened in late 1999. Don’t miss the decorative beams and wall hangings in the Prelude gallery, and folk art. Tibetan folklore from handicrafts, costumes to jewelry. Ganden Monastery 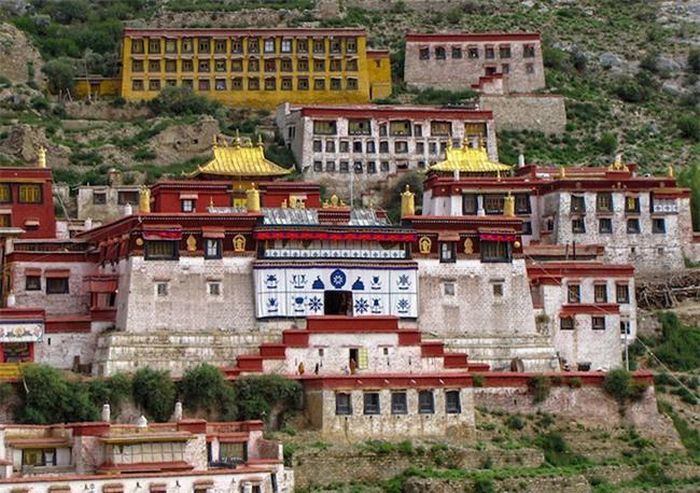 Overlooking the Kyi-chu valley on the slopes of Mount Wangbur and comprising more than 50 buildings, Ganden Monastery is one of the oldest and largest Gelugpa Buddhist monasteries ever built. The monastery was founded in 1409 by Tsongkhapa, the master of the Yellow Hat sect in Tibetan Buddhism. When he died a decade later, his mummy was buried in a tomb covered with silver and gold. The monastery was attacked during the 1959 rebellion and then shot by Red Guard artillery in 1966, Tsongkhapa’s remains were destroyed. Today, Ganden is one of the three great monasteries of Lhasa. Don’t miss the annual Buddha Painting Festival in June and Ganden Kora, a 45-minute pilgrimage around the sanctuary with incredible views over the Lhasa River. Drepung Monastery

Surrounded by mountains on all three sides, Drepung Monastery consists of pagodas and chapels painted in yellow and red along the slopes of the Gambo Utse mountain. With an impressive 600-year history, Drepung Monastery was once the largest and most powerful monastery in Tibet, and was also home to more than 10,000 monks in its heyday. Currently there are only 300 people, but this is still one of the 3 great monasteries of Lhasa. Currently Drepung contains 7 universities including: Deyang, Gomang, Shagkor, Loseling, Gyelwa, Dulwa, Ngagpa and Tosamling, each teaching a different school of Tibetan Buddhism. Visitors can discover 500-year-old Buddha statues as well as spectacular antique murals, porcelain and paintings here. Barkhor Road 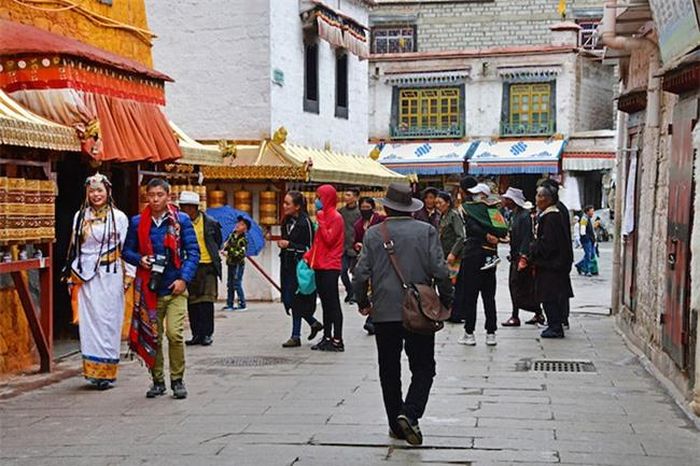 Located in the old town of Lhasa, Barkhor Street is an ancient circular street that loops around the Jokhang Temple. Built in 647 by the first king of Tibet Songtsen Gampo, the path was formed at the feet of thousands of Buddhist pilgrims. Paved with polished stone slabs flanked by traditional shops selling Tibetan knives, prayer wheels and Tibetan scrolls, Barkhor Street is one of Lhasa’s most popular tourist attractions. Sera Monastery 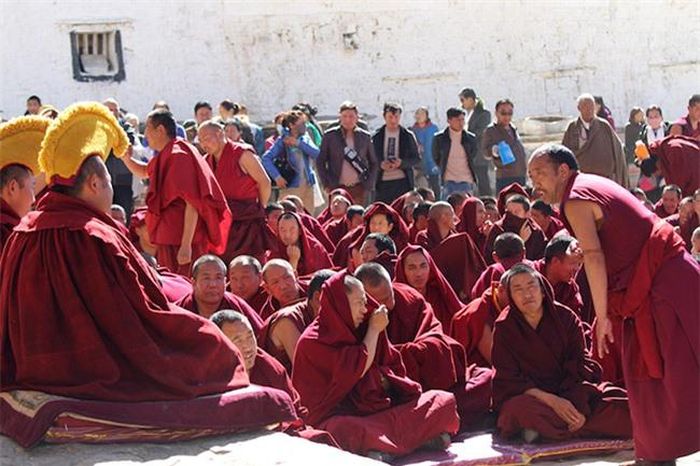 Located at the foot of Mount Pubuchok, Sera Monastery is one of the 3 great monasteries of Lhasa. It was named Sera, which means wild rose, after the hillside covered with roses was chosen to build the monastery. Today, with its tree-lined cobblestone walkways, it remains one of the most beautiful monasteries in Tibet. Founded in 1419, Sera Monastery is dedicated to the golden hat line of Tibetan Buddhism. During its heyday, it had 5 colleges and 5,000 monks. Jokhang Temple 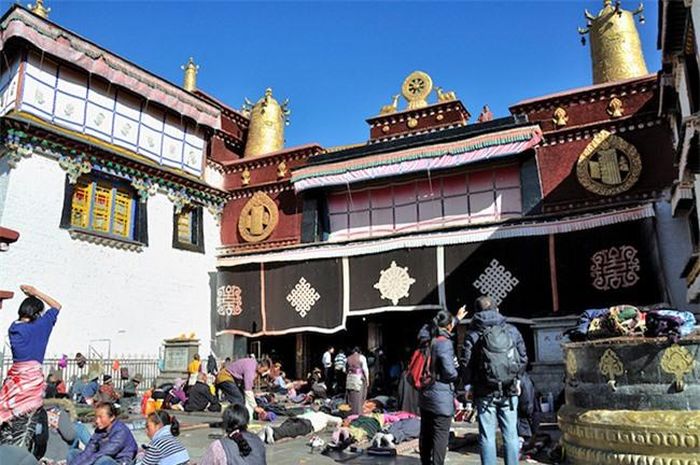 Jokhang Temple, also known as Jokhang Monastery, is the spiritual center of Tibet. Located in the heart of the old town, surrounded by Barkhor Road – the holiest pilgrimage route for Tibetan pilgrims. First built in the Tubo period, Jokhang Temple is the oldest and most sacred structure in Lhasa, with 3,000 images of Buddha and other deities. It has been rebuilt and expanded many times and has a harmonious blend of Chinese, Indian and Nepali-influenced architectural styles. Don’t forget to admire the jewel-encrusted Sakyamuni statue, Tibet’s most sacred statue, and climb to the rooftop for captivating views of the pilgrimage trail and the Potala palace. Potala Palace 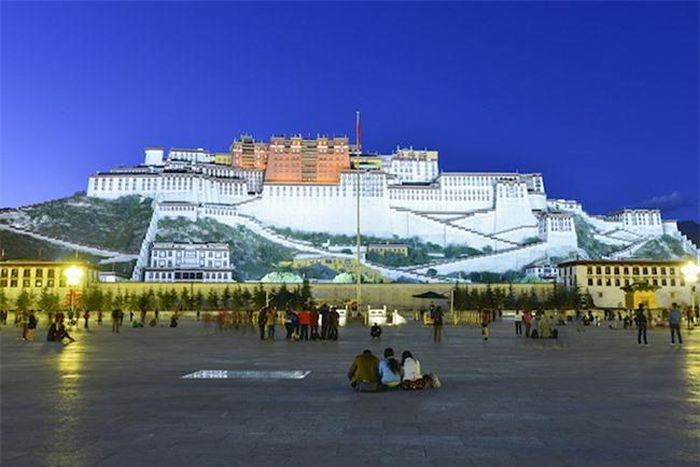 Perched on the slopes of the Red Mountain, the Potala Palace is the tallest ancient palace in the world. Having served as the winter palace of the Dalai Lama since the 7th century, the Potala (meaning High Heaven) is also the seat of the Tibetan government and a major military fortress. Originally built as Srong-brtsan-sgam-po’s palace on Mount Potala, it was demolished and rebuilt on its current site in 1645 – chosen to be located near the Great Monastery Lhasa. Today, this majestic red and white palace has more than 1,000 rooms, including the living space of the Dalai Lama, the ceremony room, the throne, and the gilded burial stupas of the former Dalai Lama.

editor - June 8, 2021 0
Lung Ngoc Hoang Nature Reserve covers an area of ​​over 8,800 hectares and the eco-tourism project focuses on research and development of core space...