Friends who like to travel should not be unfamiliar with wind and rain covered bridges in minority areas, because they are a very common bridge construction. These covered bridges not only allow people to walk through rivers and streams, but also provide shelter for passers-by. The place of rain is also a resting place for pedestrians who have traveled long distances in the depths of the mountains. 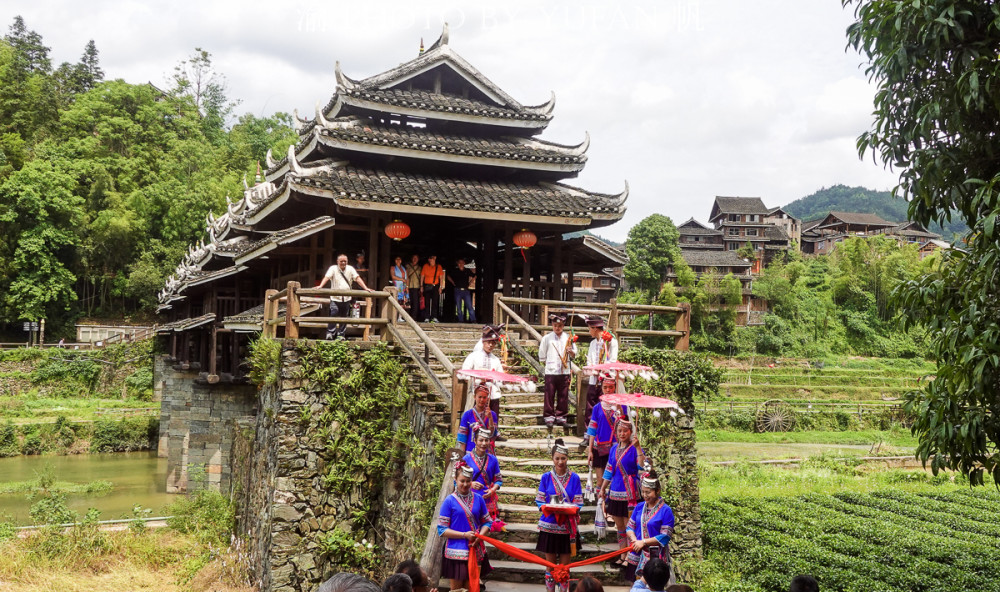 Yongji Bridge is a wind and rain covered bridge for the Dong nationality. It is located at the Linxi River in Chengyang Bazhai (Ma’anzhai), Linxi Township, Sanjiang Dong Autonomous County, Guangxi. The bridge is 96 meters in length, 4 meters in width and 7 meters in height. It is preserved in Guangxi. One of the most perfect stone arch bridges so far, it is now a national key cultural relics protection unit, and it was also included in the country’s preliminary list of declarations of world cultural heritage to the United Nations in 1997. Yongji Bridge is a representative gallery bridge built by the Dong compatriots over thousands of years, which contains super-high architectural skills and wisdom. Maybe some friends don’t know much about the Dong nationality. In fact, it is a relatively ethnic minority living in southwest my country. The total population exceeds 2.5 million. The Dong nationality compatriots are good at wooden construction. In their Dong villages, there are many buildings everywhere. Drum Tower, Zhaimen, Dajiaolou and Fengyu Bridge with peculiar shapes and rigorous structure. According to the staff, Yongji Bridge is also known as Chengyang Bridge or Chengyang Fengyu Bridge because it is located at the entrance of Chengyang Bazhai. The bridge was built in 1912 and has a history of 109 years. From the structure of the bridge Look, the lower part of the bridge is composed of two piers and three piers built with blue stones. The piers are six-sided columns. The upstream and downstream are all pointed, with an angle of attack of 68 degrees. Therefore, the design is extremely scientific, even if it encounters no matter how large the water is. Its scouring force will also be quickly removed.

As a national key cultural protection unit and a quasi-world cultural heritage, Chengyang Yongji Bridge is not only a landmark of Chengyang Bazhai, but also one of the landmarks of Sanjiang County. The villagers in the village are also full of affection for it, and often also Some grand and grand welcoming ceremonies are held on this bridge. For example, the picture above is the situation encountered when Yu Fan went to visit. The beautiful Dong family girl stopped the bridge head of Yongji Bridge with a red rope, and the tourists entered the village. Either drink, or sing in antithesis, otherwise you will not be allowed to enter the village. A very interesting welcome ceremony. 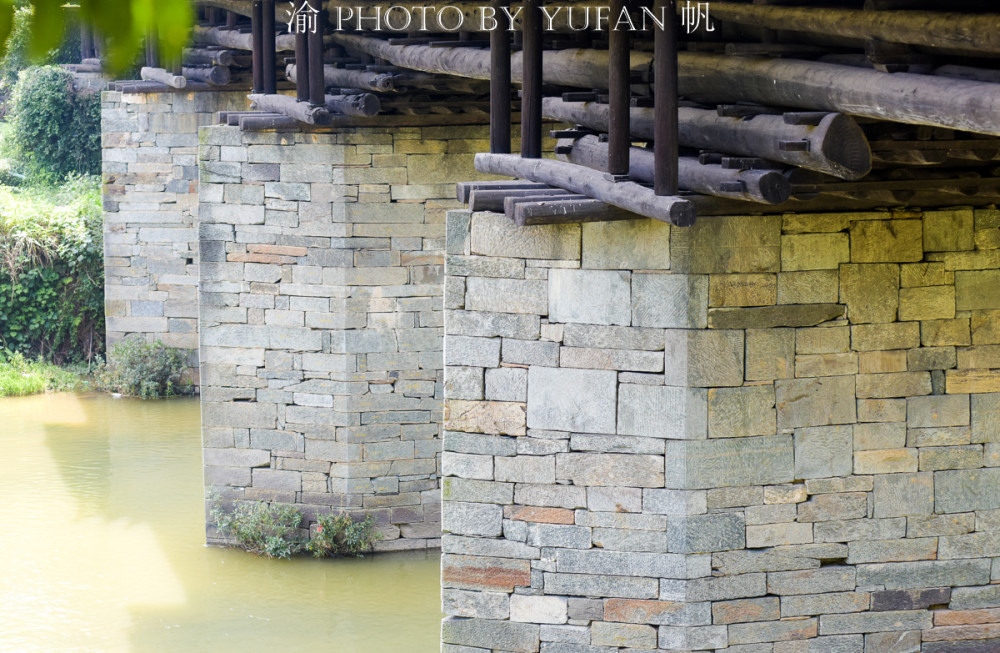 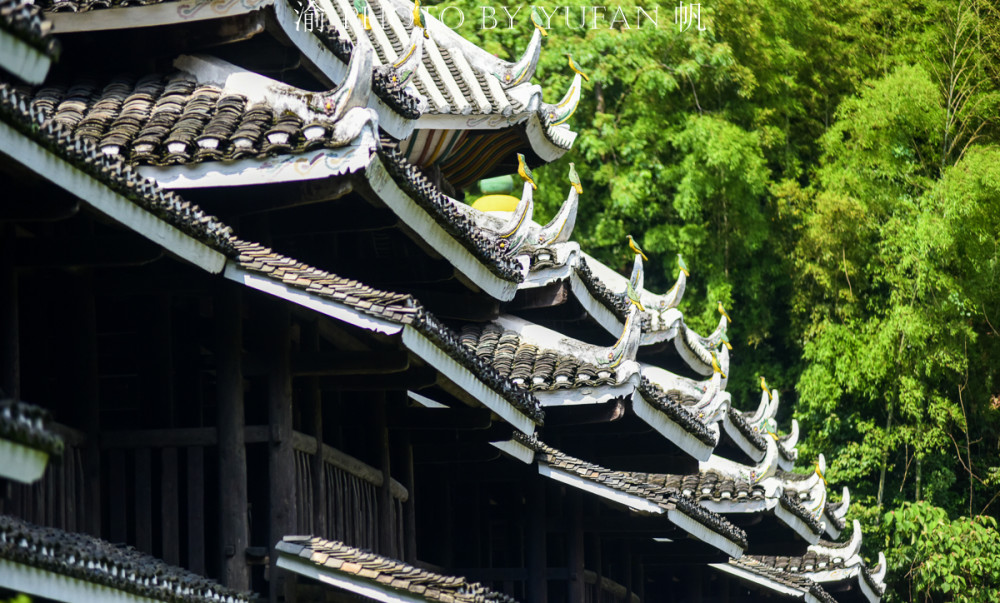 There are five bridge pavilions in Yongji Bridge, and the tops of these bridge pavilions and the corners of the eaves are inlaid with beautiful ornaments. Tung oil, lime, and glutinous rice syrup are used as raw materials to create lifelike auspicious birds. 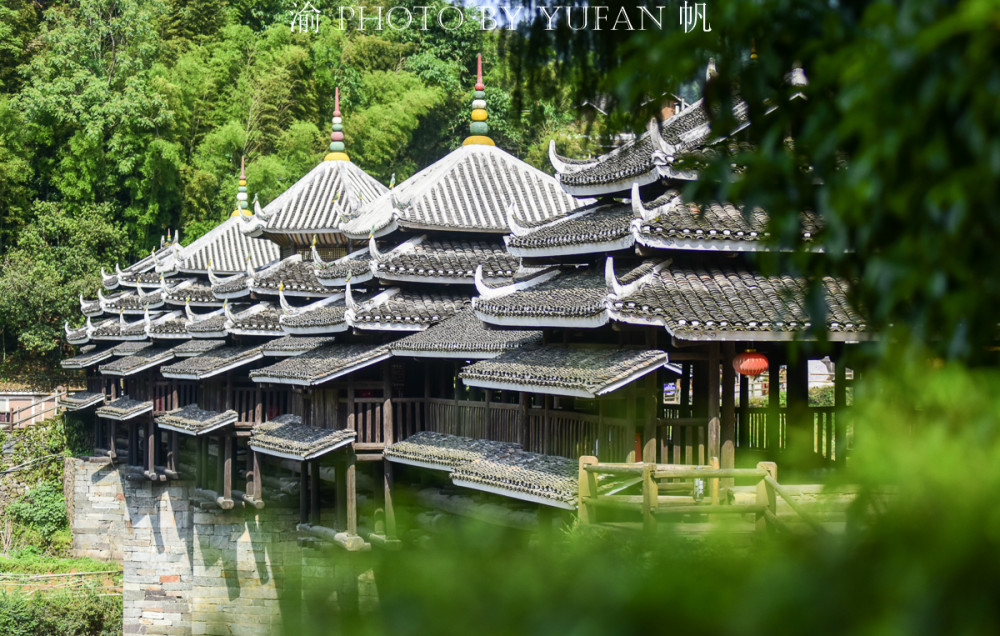 According to the old people in the stockade, these gourds and auspicious birds have good meanings, such as a bunch of gourds, which symbolizes a good weather, a lot of fruits, and a good harvest every year. And the auspicious birds are like spreading their wings and want to fly, which is a good embellishment for the beautiful pictures of Wind and Rain Bridge. 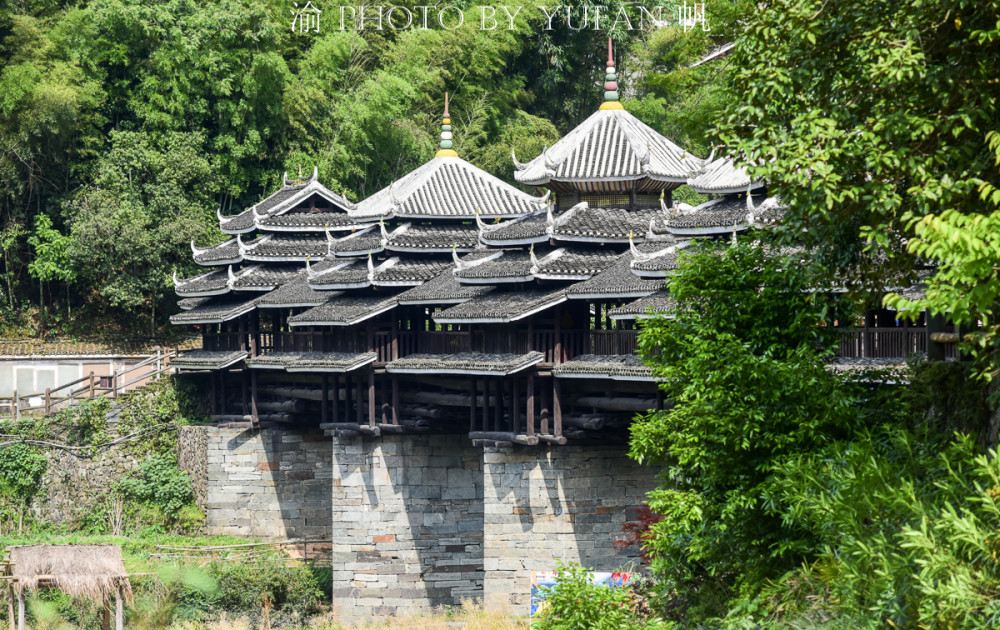 The length of Yongji Bridge is 77.6 meters, the width is 3.75 meters, and the height is 20 meters. Its structural technology and plastic art form a high degree of unity. In those days, the ink masters and craftsmen did not need to draw, make molds, or nail or rivet. They all relied on a wooden square called “fragrant pole” by the locals to measure, draw, chisel, and saw to make the structure complex and majestic. The magnificent wind and rain bridge was built. At the bridgehead of Yongji Bridge, there is a red inscription, which is said to be inscribed by Mr. Guo Moruo. In 1965, after Mr. Guo Moruo saw the model of Chengyang Bridge in Beijing, he was pleasantly surprised and happily wrote the three characters “Chengyang Bridge”. And praised with poems: Yan said the Linxi Wind and Rain Bridge, which is twenty feet long and four feet long. The Zhongling Liange is pleasant and ingenious, and the columns flow into Wangyao. Bamboo and wood are stronger than iron, and the tea forest will grow new seedlings forever. When you can get to the Three Rivers Road, learn how to use plows and work hard. At the bridgehead of Yongji Bridge, we saw pieces of bluestone tablets erected on them, which recorded the names of the donors of the villages and villages when the Fengyu Bridge was built. According to the “Sanjiang County Chronicles”: Actively strive to be the first… The supply of materials is regardless of the rich or the poor, the service does not count the sun and the moon, men and women, old and young, only do their best, and never stop without prejudice.” The Dong family’s love of public welfare, solidarity and friendship can be seen from this. This is the treasure of Chengyang Bazhai town-Yongji Bridge. As a wind and rain bridge spanning the river with all stone and wood structure, it has a long history and is beautiful in appearance, exquisitely crafted and well-preserved. It may become a world cultural heritage in the future. It’s just a matter of time. If you have the opportunity to visit Liuzhou, you can stop here.

Teen Danang, have you checked-in the ‘purple to find sim’ garden...

Nam Duyên - April 19, 2021 0
After the season of pure white chrysanthemum, it is the turn of the heather to color the whole sky of Da Nang in purple....