To solve the pork shortage problem, many farmers in China have fattened pigs to the size of a polar bear, which can weigh up to 750kg. However, they are tasting the bitter fruit of raising this giant pig breed.
China is the world’s top pork consumer. On average, a Chinese person eats more than 50kg of pork every year.

In 2018, African swine fever broke out in China, raging for more than a year, wiping out more than half of the country’s 500 million pig herd. The pork crisis has plunged China into a severe shortage of pork. According to estimates, the price of pork in China has skyrocketed to a record, at one point increasing by 60-80% compared to before the epidemic. The thirst for pork has led Chinese livestock corporations, scientists and farmers to find solutions to increase the supply of pork. And the idea of ​​raising pigs as big as possible appeared. At that time, Chinese scientists were looking for a way to create a “super giant” pig breed. Specifically, the Animal Research Institute of the Chinese Academy of Sciences produces pigs that grow faster and with better meat by modifying their DNA code. This breed is quite strong, able to withstand harsh winters thanks to a special gene in the body. Notably, this pig breed has a huge weight, weighing from 200-500kg, even reaching a weight of 750kg. As such, they are roughly the size of a pygmy hippopotamus or a female polar bear. 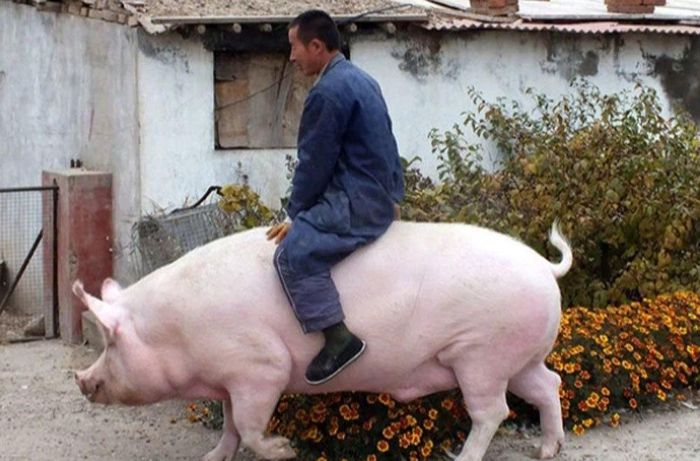 Chinese farmer rides on a “super giant” pig. (Photo: China Daily). Chinese farmers also joined in to help. From the end of 2019, Chinese farmers started breeding “super giant” pigs in the hope of generating higher profits. They are constantly fattening to produce pigs that are twice their normal weight. At the end of 2019, Bloomberg Once reported, a pig farm in Ho Chi Minh City. Nanning (Guangxi province, China) has successfully raised a pig weighing 500kg. At that time, if slaughtered, these pigs could sell for up to 10,000 yuan (equivalent to about 36 million dong). This level of revenue is 3 times higher than the average monthly income of the household head compared to traditional pig breeds. Since then, farmers across China have competed to breed giant pigs. The trend of giant pig farming is considered as one of the solutions to relieve stress on pork supply for Chinese people. Lin Guofa, a senior analyst at agriculture consulting firm Bric, said at the end of 2019 that the average weight of pigs at slaughterhouses on large farms had increased to 140kg, compared to with a normal weight of 110kg. As such, farms have increased pig weight by at least 14%. Profits of pig farmers at one point increased by more than 30%. 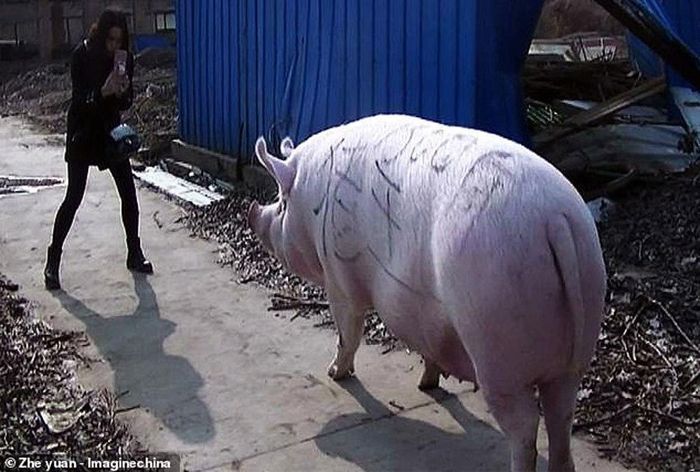 Huge pig, as big as a polar bear. However, Ren Shouven, an expert at the Cattle Research Institute at the Jiangsu Academy of Agricultural Sciences, told Sputnik that he disagreed with this conclusion. According to Mr. Ren, the increase in rearing time led to a delay in the release time. And the longer it takes to breed, the more capital is needed. The sooner pork is put on the market, the more likely it is to reduce the supply shortfall. Therefore, raising huge herds of pigs does not help in the fight against pork shortage. Mr. Ren also said that this method of “fattening” pigs is against the principles of scientific breeding. Increasing the head of a pig can be much more effective than increasing the size of the animal. Moreover, mass production of giant pigs is completely inefficient because increasing meat will increase fat. But grease has a lower commercial value. Not only that, the type of pork with a lot of fat will be less quality than the meat of pigs of normal weight. In fact, “super-giant” pig farmers in China are having to taste the bitter fruit when wholesale pork prices in the country plummet. Bloomberg reported that the wholesale price of pork in China has fallen more than 40% since mid-January. The reason for the shock drop in pork prices in the country of billions of people is due to falling demand, high imports of foreign pork and the panic of many farmers selling off their pigs after the outbreak of African swine fever in this country. Huge super pigs are also considered as one of the reasons why pork prices in China plummeted without stopping. At a conference in mid-May, Qiu Huaji, head of the swine infectious disease department at the Harbin Veterinary Research Institute, pointed out that the “super giant” pig breed was one reason for the price of meat. Pigs in China plummeted. Many farmers in China say they will no longer raise super-large pigs because the price of pork has fallen deeply, in addition to the high price of feed, which has reduced profits. The giant pigs eat more than normal pigs, so the more they raise the more losses. Muyuan Foods – the largest pig producer in China – predicts pork prices in the country will continue to fall and is expected to bottom out in 2022 or 2023. Hanh Nguyen (Synthetic)

Video of ‘airplane standing still in the sky’ is discussed on...

Nguyễn Hiếu - An Khang - June 18, 2021 0
In addition to visual effects, the online community also uses conspiracy theories to explain this phenomenon. According to the Unilad , user-generated footage...