Home News World There are frequent internal conflicts at the G7 summit. After the British... 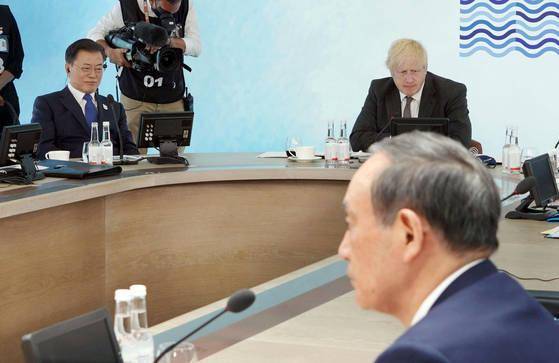 According to a report by the Global Times on June 14, South Korean media revealed that during the G7 summit, the agreement reached by the Ministry of Foreign Affairs of South Korea and Japan on holding the summit meeting between the two countries was unilaterally cancelled by Japan. It is reported that the reason given by Japan is that it is very dissatisfied with South Korea’s “territorial protection exercise” in the Sea of ​​Japan.

As for this “territorial protection exercise”, it is actually a routine military exercise on the “Dokdo Defense” that South Korea regularly organizes in the first and second half of each year. It is precisely the territorial sovereignty dispute of Dokdo, which has been a stumbling block between Japan and South Korea for more than half a century since the end of World War II.

Dokdo is only the label and name of South Korea, but Japan calls it “Takeshima.” The island is located in the southwestern waters of the Sea of ​​Japan. It consists of two small islands and dozens of reefs. There are also vast waters around it. Dokdo is currently under the actual control of South Korea. South Korea has built military heliports and lighthouses on the two main islands, which has caused strong protests from Japan. Both Japan and South Korea believe that this island and the surrounding waters are theirs, and they have a lot of fun every year. The two sides also trigger various diplomatic crises of varying severity from time to time. This also makes Japan and South Korea a common ” Boss”-the United States feels extremely bad.

In order to facilitate Japan and South Korea to temporarily shelve the island dispute and work together to build a US-Japan-Korea military alliance similar to the “Little NATO in East Asia”, the United States has taken great pains. South Korea is not a member of the G7, but this time Moon Jae-in was strongly invited by Biden to attend the conference, just to take this opportunity to bring Japan and South Korea together to ease the conflict between the two countries. However, it now appears that Biden’s thoughts were completely in vain, and the two younger brothers of Japan and South Korea were having trouble at the G7 summit.

G7 was originally a grand event held by a small group of developed countries in the world. Despite the existence of the common topic of “how to deal with China” in the holding of this summit, the various contradictions among the member states have led to constant discord. For example, on the border disputes in Northern Ireland, the United Kingdom quarreled with France, one of the leaders of the European Union, and then extended to the fact that there were camp-style differences between the United States, Britain, Canada and Germany, France and Italy. It seems that this summit is not chaotic enough, and Japan and South Korea have “fired” each other again.

Back to the dispute between Japan and South Korea. Originally, this time South Korea was invited by the United States to participate in the G7 summit, and Japan was deeply uncomfortable, but it was inconvenient due to the love of the White House. After all, G7 is the club of the most developed countries in the world, while Japan considers itself to be the representative of developed countries in the Asian region, and is particularly unwilling to share this “honor” with its rival South Korea.

The dispute over Dokdo (Takedo) will not be repeated. On the issues left over from history, the contradiction between Japan and South Korea cannot be solved.

In modern times, Japanese fascists have brought serious national disasters to South Korea on the peninsula, causing the people of the peninsula and the entire East Asia to groan painfully under the iron heel of Japanese militarism. Although the cruelty of the Japanese army has become history, it is a painful memory that the people of South Korea and other victimized countries will never erase. For example, South Korea has never spared Japan on the issue of comfort women and workers’ compensation. The Japan-South Korea semiconductor “war” that began in the summer of 2019 originated from this, and the two countries had launched an extremely fierce sanctions war.

Both Japan and South Korea are export-oriented countries, and they overlap in many industries. Such as automobiles, semiconductors, construction machinery, cosmetics, etc., each year there is an extremely fierce battle for entering the Chinese and global markets, which further highlights the deep-rooted contradictions between Japan and South Korea.

The decoration of the mansion of the original drying nursery, designed...

editor - June 18, 2021 0
Miaopu has always been an acting actress that we particularly like. Although most of her roles are particularly strong roles, her unique concept in...