Old televisions, street signs, motorcycle helmets, Christmas trees… it’s hard to imagine that it’s garbage that was ‘trapped’ by the bubble barrier when it drifted down the Westerdok canal in Amsterdam. This line of air compressor-powered bubbles is said to be a simple yet effective way to stop plastic pollution from flowing into the oceans.
According to Philip Ehrhorn, co-founder and CTO of The Great Bubble Barrier, the Dutch social enterprise behind this system, the bubble barrier “traps” 86% of the waste flowing into the IJssel River and beyond. further to the North Sea.

Panorama of the system of bubble columns collecting plastic waste on the IJssel river in Amsterdam, the Netherlands From idea to complete technology With permission from the Amsterdam municipality and the region’s water authority, the bubble barrier system was installed in October 2019 in less than five hours. An air compressor feeds air through a perforated tube that runs diagonally across the bottom of the channel, creating a stream of bubbles to lift the waste to the surface and guide them to a collection system. To minimize noise, the compressor is located 50m from the fence, in a renovated and renewable energy container from Amsterdam. Currently, the Great Bubble Barrier works with Amsterdam’s water authority and the NGO Plastic Soup Foundation to analyze which plastic has been collected to help develop new policies on plastic waste. Amsterdam’s water authority cleans the 1.8 x 2m basket at the collection system three times a week. They will be sorted and put into recycling. With a background in naval architecture and ocean engineering, German Philip Ehrhorn first created the bubble barrier while he was taking a course in environmental engineering in Australia. At a wastewater treatment plant, he witnessed the use of oxygen bubbles to decompose organic matter. “It’s like a jacuzzi. And what I noticed was that some of the plastic items that people had flushed down the toilet were being collected in a corner,” said Philip Ehrhorn. This observation sparked his idea and then bubble-barrier technology. Unbeknownst to Mr. Ehrhorn at the time, three other Dutch women, Anne Marieke Eveleens, Saskia Studer and Francis Zoet in Amsterdam were also working on this idea. They went to a bar one evening to discuss plastic pollution. Looking at the bubbles in his beer, inspiration begins. Meanwhile, a friend of Ehrhorn’s happened to see a promotional video promoting the idea of ​​a Dutch women’s group for a contest calling for solutions to remove plastic from the environment. “We connected and found that we had the same vision and mission. So I moved to the Netherlands the next day,” Ehrhorn recalls. In the end, 4 people turned the idea into a complete bubble barrier technology installed on Amsterdam’s IJssel river. 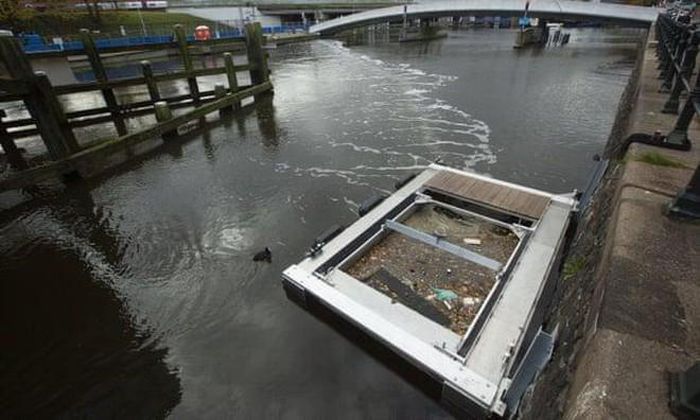 Solutions to combat plastic waste pollution Much of the plastic waste in Amsterdam’s Westerdok canal comes from trash bags that locals leave outside their homes, Mr. Ehrhorn said. If the bag is torn, wind and rain can carry the trash down the canal. Up to 80% of ocean plastic is thought to come from rivers and coastlines. Globally, 11 million tons of plastic waste ends up in the oceans each year, threatening the lives of many aquatic species. Plastic debris less than 5mm in size, known as microplastics, is dangerous to marine life because although they cannot be digested, they are mistaken for food by fish, invertebrates and animals. marine mammals. Seabird conservation ecologist Stephanie B. Borrelle, BirdLife International’s Regional Coordinator for the Pacific and Oceans, warns that despite ambitious commitments from governments around the world, humans could waste 53 million tons of plastic waste into marine and freshwater ecosystems around the world by 2030. “It’s a really interesting thing for us to look at, as other types of barriers placed in aquatic environments can have an ecological impact on the environment,” Borrelle said in her research on bubble barriers. and animals move through that system.” Ms. Borrelle did ask a few questions about this technology such as what the solution is for wide rivers or rivers with a lot of boat traffic, or in developing economies where they will need a pump. have uninterrupted electricity and regular maintenance… “There are certain limitations, but in my view, it is an important solution to tackle plastic waste. The problem of plastic pollution often doesn’t have a single solution,” the scientist said. Startup Great Bubble Barrier is planning to install more bubble barriers across the Netherlands, Portugal and Indonesia. Installation costs and energy use depend on the location and flow of the river. But importantly, in addition to collecting plastic waste before it ends up in the ocean, the system can change people’s attitudes and be an educational tool to prevent waste and littering.

Announced new line of herbicides to protect soybean and corn