Sugarcane fields are damaged by beetle larvae, yield can be reduced by 13 – 54%, sugar by 11 – 57%.
Beetles, Dangerous Cane Destroyers

The sugarcane beetle species mainly include the black scarab, the brown beetle and the large brown hairy beetle, which often arise and cause strong damage in sandy soil, riverbank soil, soil with light mechanical composition, or on specialized cultivation areas, growing sugarcane for many years, not rotating crops with other crops. 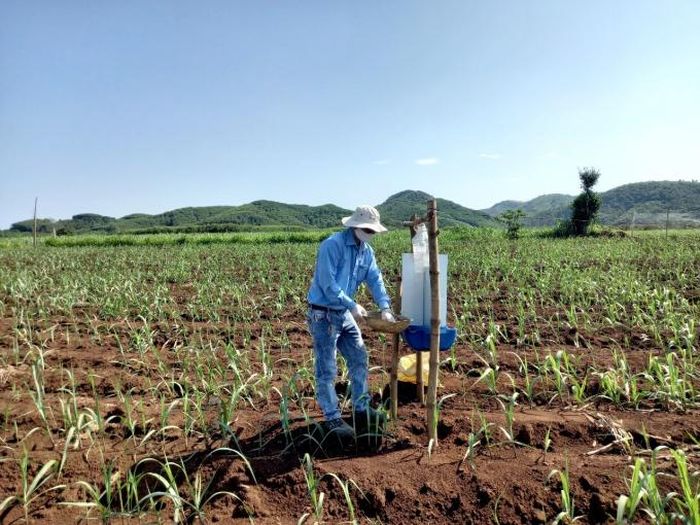 NASU technicians check for insects entering the lamp trap. Photo: NASU. The life cycle of these beetles lasts from 365 to 720 days, going through 4 stages: egg, larva (worm), pupa and adult. Over the years, Nghe An Sugarcane Company Limited (NASU) has researched and applied integrated measures to effectively manage sugarcane beetles in the company’s raw sugarcane areas. This is the result that NASU has studied the management of sugarcane beetles in many countries such as China, Thailand, Indonesia… to apply on NASU’s sugarcane material area. Mr. Nguyen Hoang Son Phong, engineer of NASU said that sugarcane field was damaged by beetle larvae, yield decreased by 13-54%, sugar decreased from 11-57%. The original cane is more severely damaged by beetles than silk cane. Larvae (larvae) hatch from eggs, live in the soil for an average of 240 – 480 days (larvae of the brown hairy beetle are larger, longer than the beetle species) before transitioning to the pupa and adult stage. During the development cycle, larvae are active in the ground, age 1 and 2 in addition to eating cane roots, also eat organic matter, humus, decayed organic fertilizer or bagasse.

Light traps are quite simple but effective in killing beetles applied in the cane material area of ​​NASU. Photo: NASU. From the end of the age of 2, the larvae only feed on the roots and underground stems of sugarcane. The 3-year-old larvae have a long sexual development time and cause the most damage to sugarcane, making sugarcane unable to grow, withering, drying and dying, leading to a decrease in sugarcane and sugar yield. The more damage the harvest stage, the more obvious. When the 3-year-old larvae are full, they begin to build cocoons out of soil and pupate to stay in the cocoon. If the weather conditions are favorable, after about 20 days, the pupae will turn into an adult, break the cocoon and crawl to the ground. Unfavorable weather conditions, especially low soil moisture and low temperature, will prolong the pupal development time. This extended period, called the hibernation period, can last up to 4 months. Effective management of beetles According to the research as well as the process applied effectively at NASU, control beetle larvae by plowing the soil thoroughly before planting sugarcane, collecting larvae and spreading the granular insecticide Patox 4GR, with the amount of 40 kg/ha in rows when planting sugarcane. 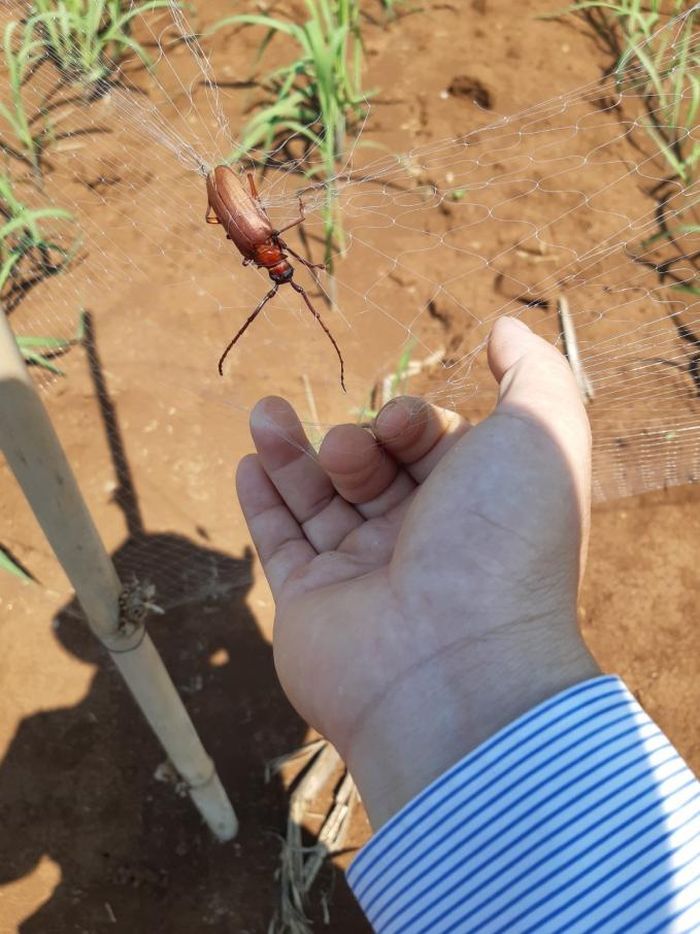 Beetles trapped in nets. Photo: NASU. However, the method of spraying granular pesticides into the soil, in addition to killing larvae, will destroy beneficial microorganisms and insects in the soil, affecting the soil environment. The adults of these sugarcane beetles tend to be strong with light, fly out to mate from March to May, after showers with an amount of over 20mm. This is the best time to kill adults, limit egg laying, and reduce later harm caused by larvae. Mr. Hoang Quoc Tiem, a long-time sugarcane grower in Dua village, Nghia Yen commune (Nghia Dan, Nghe An) said that in the spring crop of 2021, in addition to killing larvae when growing sugarcane, NASU has implemented additional measures to destroy them. maturity such as using lamp traps, casting nets, and making traps in the field. The light trap is designed to be able to install light bulbs from the grid, battery lights or solar power systems. Traps are made by taking advantage of plastic containers, above are lights, below are placed water, add diesel oil to prevent the adults from moving out of the trap. In the middle of the light trap, install 2 corrugated iron sheets of size 40 cm x 60 cm, perpendicular to each other. As adults, beetles are attracted to light, flying into traps will collide with corrugated iron and fall into the water. After the rainy nights of early summer, each light trap catches 250-300 brown beetle adults, 40-50 black beetle adults, and 20-30 large brown-haired clipping adults and lots of adults of other sugarcane borers.

The “product” obtained after a night of light traps includes many different species of beetles and borers… Photo: NASU. In addition, on the field, a fishing net is installed, the size of the net is 1cm x 1cm, and the adults move hundreds of fish of all kinds after every night it rains. In the sugarcane field, from 50 – 100m, dig pit traps, measuring 30 cm deep x 60 cm long x 60 cm wide, below the manure and by-products, which are the preferred food of adults, mixed with drugs. Low-odor insecticide is Goldra so that when adults eat it, it will be destroyed. According to the research results of scientists, the female beetle species can lay an average of 229-328 eggs, the lowest hatching rate from eggs to larvae is 70%. With the method of killing adults from light traps and netting in the field, it will limit a lot of harm caused by larvae to sugarcane … Mr. Phan Van Toan, Director of Agricultural Extension of Nghe An Sugar Co., Ltd. said that with the above management method, the rate of damage of beetles on both silk and sugarcane fields is reduced. This is the money for the company to expand the model on the raw material area in the coming years to stabilize the material area and improve production efficiency for farmers.

Robbed by grave robbers from the mouth of Tu Hi’s remains,...

editor - June 4, 2021 0
The journey of the Nightingale that Empress Dowager Cixi used to hold in her mouth when she died is really an interesting journey. Empress...