Home News Vietnam Responding to the COVID-19 pandemic: Not to prolong social distancing

The city’s anti-epidemic force urgently investigates epidemiology, identifies outbreaks, sources of infection, and scales to narrowly and tightly localize it, striving not to continue to prolong social distancing. on a large scale”, Deputy Prime Minister Vu Duc Dam requested at an online meeting with leaders of the Ho Chi Minh City Steering Committee for COVID-19 Prevention and Control, on the afternoon of June 17. 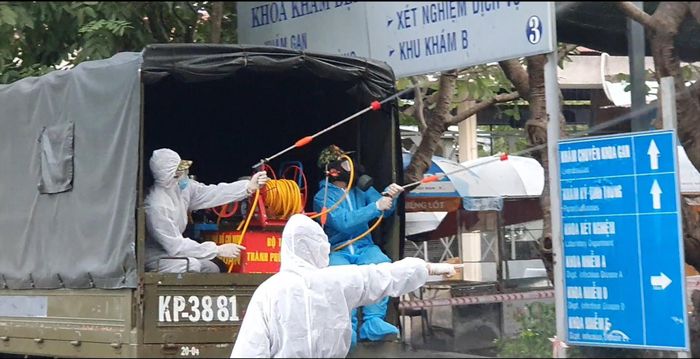 Disinfectant spray at the Hospital for Tropical Diseases in Ho Chi Minh City Photo: Uyen Phuong Translation in Ho Chi Minh City is very complex Vice Chairman of Ho Chi Minh City People’s Committee Duong Anh Duc said that there are currently 7 enterprises in industrial parks (IZs) in Ho Chi Minh City with COVID-19 cases. Most of the places have only 1-2 cases, there is no sign of spreading to other places. At the bridge point in Ho Chi Minh City, Deputy Minister of Health Nguyen Truong Son said that after the first 15 days, the epidemic situation in the city was still “very complicated”; There are still some chains discovered in the community. “However, in terms of epidemiology, we have a chance to control the chains of infection,” said the Deputy Health Minister. In Ho Chi Minh City, a number of aquatic and seafood processing factories have a very high density of workers, in a cold and closed environment, so the number of cases is higher (6-11 cases). It is expected that Ho Chi Minh City will set up about 100 delegations to inspect all factories and enterprises operating in the industrial park. Large factories and enterprises need to have a plan to arrange accommodation for the core workers, in the industrial park or a closed process from accommodation, dormitory, to the factory to work, live and bring. about. The deputy minister said that currently, Ho Chi Minh City has prepared a treatment plan for 5,000 patients, but needs to prepare more equipment to treat patients on ventilators, with severe developments. Do not “circle but loose”! That is the direction of Deputy Prime Minister Vu Duc Dam for Ho Chi Minh City. He emphasized that Ho Chi Minh City is a big city, the authorities and people have gone through the practical process of fighting the epidemic, so the decisions on social distancing, isolation and blockade must be in the spirit of trying to be as concise as possible. . The purpose of social distancing is to slow the spread of the epidemic, identify outbreaks, sources of infection, and scale, to narrowly, tightly, and strive not to prolong the situation. widespread social distancing. Ho Chi Minh City has passed 14 days of social distancing, must urgently investigate the epidemiology, classify the areas considered safe or have a solution after continuing to implement some measures that are determined to be safe. to loosen. “On the contrary, the areas at risk must be tightened even more, not to the situation of mass concentration as reflected by the people; clearly define public areas not to gather large numbers of people; control traffic flows from outbreak areas in the city. The spirit is not equal to everything, because we have to serve dual goals, even in fighting the epidemic. If the area is wide but not tight inside, it will not only affect the economy and society, but it will also be very difficult to fight the epidemic,” the Deputy Prime Minister requested. Pilot guide to isolating F1 cases at home For industrial zones, the Deputy Prime Minister asked Ho Chi Minh City to “keep up with strong measures”. The city needs to increase testing and warning to quickly detect infections in the first 3 days. “Although Ho Chi Minh City’s testing capacity is very good compared to other provinces, with a population of 10 million people and many industrial zones, the city must have a plan to increase testing capacity in case the epidemic occurs in the industrial zone. In particular, the coordination of testing must ensure consistency among the testing units, meeting the sampling rate, tracing to catch up with the spread of the epidemic, absolutely not allowing the testing situation to be interrupted. slow, mistaken due to coordination work as happened in some places,” the Deputy Prime Minister noted. In the coming time, Ho Chi Minh City needs to urgently complete the pilot guidance on isolating F1 cases at home, ensuring strict medical safety as well as people’s privacy, in accordance with the conditions of the city. in situations where a large number of people are infected. Deputy Minister Nguyen Truong Son said that from June 18, Ho Chi Minh City will pilot self-testing samples and carry out F1 isolation at home. At the same time, a review will be organized to ensure safety in the concentrated isolation area and prevent cross-infection; strengthen the review outside the community, industrial zones. According to the Ministry of Health, on June 17, Vietnam recorded 515 new cases. In which, there are 12 isolated cases immediately after entry and 503 cases recorded domestically in Bac Giang (327), Ho Chi Minh City (137), Tien Giang (13), Bac Ninh (12), Binh Duong (7), Ha Tinh (4), Lang Son (2), Nghe An (1). Of the 503 cases, 495 were detected in an isolation ward or a blockade. Stop cross-infection in concentrated isolation khu Chairman of Bac Giang Provincial People’s Committee Le Anh Duong said that hot spots around industrial zones in Viet Yen have been cleared and cleaned. New infections appeared mainly in 25/286 concentrated isolation areas for workers of Hosiden Company. At this point, Bac Giang province will continue to expand the density in concentrated isolation areas with new infections according to high-risk groups (1 person/room), medium risk (2-3 people/room), high-risk low (4 people/room). Bac Giang classifies concentrated isolation areas according to red (with new cases for 2 consecutive days or 1 day with many cases), yellow (with cases of infection), blue (no cases of infection), to focus on inspection and key surveillance, limiting cross-infection, etc. Up to now, Bac Giang has 123 factories with about 20,000 workers returning to work in the industrial park. Enterprises strictly comply with the regulations on epidemic prevention and control in the direction that the workers of any enterprise will stay together, eat together, work together in shifts and crews. So 3 companies detected 9 cases but did not lead to widespread spread. Bac Giang has a permanent monitoring department for epidemic prevention and control in the industrial park. Deputy Prime Minister Vu Duc Dam asked Bac Giang province to focus on expanding the density in concentrated isolation areas with cases to stop cross-infection.

Before the Vietnam – Malaysia match: Highly focused to win!