On June 14th, Giant Network (002558.SZ) issued an announcement stating that the company’s controlling shareholder Giant Investment intends to donate 1.1% of the shares held by Giant Network to Giant Network for free. 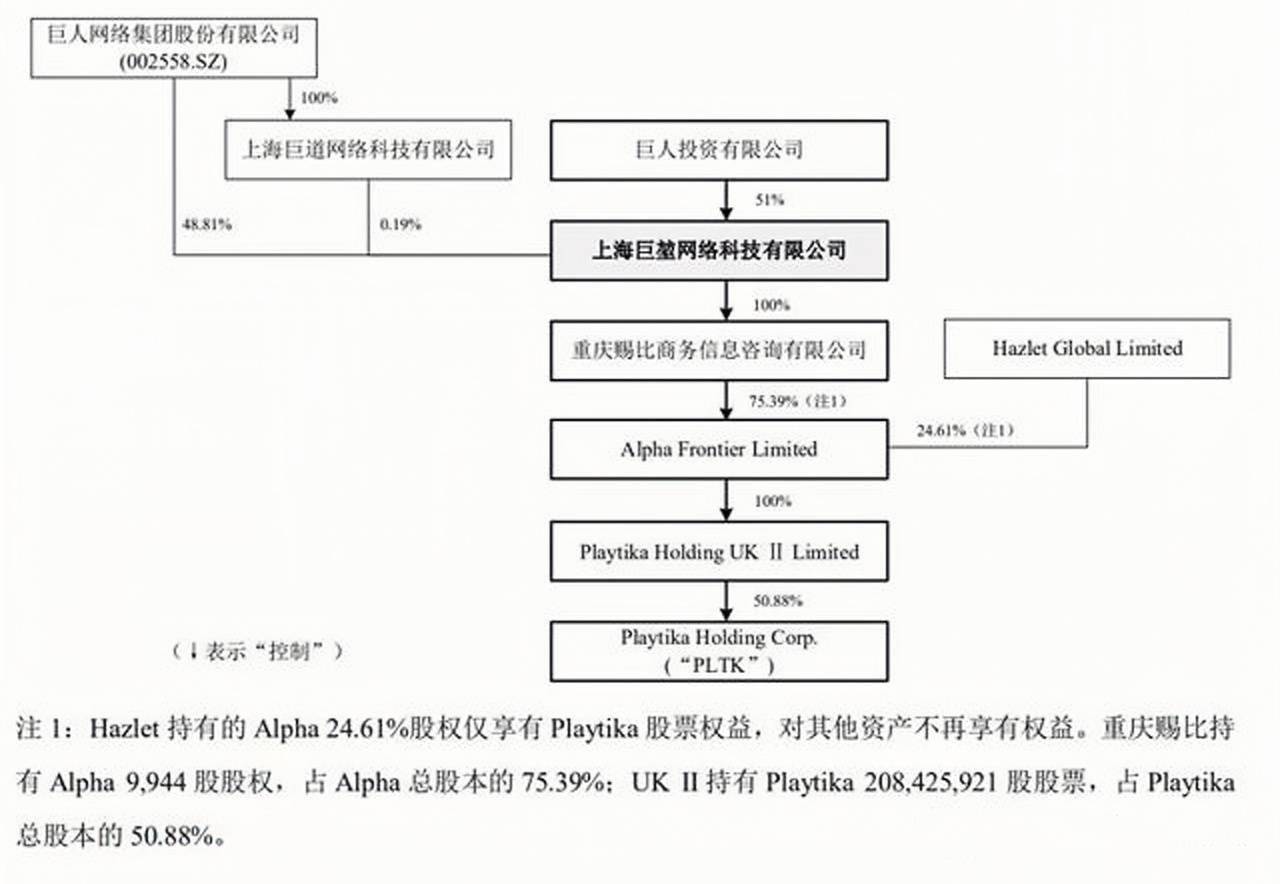 It is reported that Jukun Network is a strategic linkage platform between Giant Investment and Giant Network. Its core asset, Playtika, is an Israeli high-tech Internet company driven by artificial intelligence and big data analysis technology. In January 2020, Playtika was listed on the Nasdaq Stock Exchange in the United States.

Tianyancha shows that at present, Playtika mainly uses artificial intelligence and big data analysis technology to engage in the research and development, distribution and operation of casual social network games, and its business is distributed in overseas markets such as the United States, Europe, and Australia.

Playtika has maintained rapid growth in the past few years. According to Playtika’s fourth-quarter and full-year 2020 financial reports released since its January IPO, Playtika’s fourth-quarter revenue was US$573.5 million, a year-on-year increase of 17.5%; net profit was US$76 million, compared to US$30 million in the same period last year. Later EBITDA (EBITDA is the abbreviation of Earnings Before Interest, Taxes, Depreciation and Amortization, that is, profit before interest, taxes, depreciation and amortization) was 210.4 million US dollars, higher than the 169.7 million US dollars in the same period last year.

In terms of revenue and profit, Playtika’s 2020 revenue was US$2.3715 billion, an increase of 25.64% year-on-year; the net profit in 2020 was US$92.1 million, which was a decline of nearly 70% compared with US$288.9 million in 2019. The adjusted EBITDA was US$940 million. Overall, this is the first time that Playtika’s annual revenue has exceeded US$2 billion, and it is also the first time that its casual games have contributed more than US$1 billion in annual revenue.

In 2016, Giant Network “backdoor listing”, Giant Network Chairman Shi Yuzhu, together with investors such as Yunfeng Fund, prepared to acquire Playtika from Caesars Interactive Entertainment for US$4.4 billion. If the acquisition is successfully completed, Giant Network will hold 100% of Playtika’s shares in total and determine that the transaction consideration for all of Playtika’s Class A common shares is 30.5 billion yuan. It is worth mentioning that the giant’s partners in this acquisition include Shanghai Lingyi and Shanghai Lingyi. Behind them is Yu Guoxiang’s Ningbo Yu family. Previously, China Net Technology disclosed that Yu Guoxiang had transferred shares in Leyou Technology and received $80 million in sincerity from potential buyers.

However, Playtika itself is very controversial as a board game. In fact, Playtika is currently the world’s number one chess, card, and gambling mobile game company. The founder Robert Antokol is an industry veteran and has worked in CMate and Oberon Media successively. In 2010, Antokol founded Playtika with US$1.5 million. Within a year, the company was acquired by Caesars Interactive Entertainment for US$160 million, which was more than a hundredfold.

The key issue of the acquisition may be Playtika’s “suspicion of gambling”. In 2019, the Securities Regulatory Commission gave two feedbacks on Giant Network’s application for issuing shares to purchase assets. They all commented on the virtual currency, recharge status, probability of winning or losing, and abnormal recharge during the operation of Playtika. Conduct key questions on behavior and other issues, such as whether the game in Playtika has the function of refunding currency or points, whether there is a situation where cash and other properties are used as prizes or cash and other properties are given to others by way of repurchasing prizes, whether there are other platforms or objects Assets, major shareholders, directors, supervisors, and other related parties provide services or conveniences for their refunds, refunds, transfer of points/game currency, and cash and other property rewards or transfers.

In addition, in July 2020, the Shenzhen Stock Exchange issued a letter of concern to Giant Network, asking whether Giant Network previously disclosed the “Material Asset Purchase and Related Transaction Plan” whether the underlying asset is suspected of gambling.

Therefore, the “suspicion of gambling” may be one of the reasons why the giant network’s acquisition transaction has been repeatedly rejected by the China Securities Regulatory Commission.

The acquisition did not go smoothly. In addition to the controversy in the project itself, there were also some hidden ups and downs. Earlier, there were rumors that Shi Yuzhu was taken away by the Hangzhou police for investigation in 19 years, causing shocks in the industry.

Later, Shi Yuzhu refuted the rumors on Weibo, saying that someone went to the Securities Regulatory Commission to discredit him in order to undermine the approval of the Giant Network’s major asset restructuring project and spread rumors that he was taken away by the police.

It took more than 4 years to install Playtika in an A-share listed company. Shi Yuzhu did not give up. Through the “curve” method, he acquired Playtika with a huge amount of money from a giant network affiliate.

According to Tianyan Check, Giant Network was established on July 22, 1997 with a registered capital of 2.024 billion yuan. The legal representative is Liu Wei, Chairman of the Investment Decision Committee of Giant Innovation Investment Fund. Its business scope includes the development and sales of computer game software; online game publishing Operation; use the Internet to sell game products; animation design, production, etc. In January 2021, a large equity pledge occurred. The number of pledged shares was 79.2 million shares, and the market value of pledged shares reached 1.367 billion yuan. Shareholders include Shanghai Giant Investment Management Co., Ltd., Shanghai Tengpeng Investment Partnership (Limited Partnership) and other 10 companies. Among them, the largest shareholder is Shanghai Giant Investment Management Co., Ltd., with a shareholding ratio of 27.87%. Giant Networks invested a total of 14 companies abroad, of which Fei Yongjun, Vice President of Giant Networks, served as the company’s legal person accounted for 8 companies.

This means that in addition to funds controlled by Shi Yuzhu, funds such as Hony and CDH are all selling the shares held by Giant Network.

The original idea was to force overtime to work unscrupulously, and...

editor - April 19, 2021 0
You can be the best technology company without working overtime.By Xing ShuboThe employees are so "lazy" and Microsoft is so rich and can...