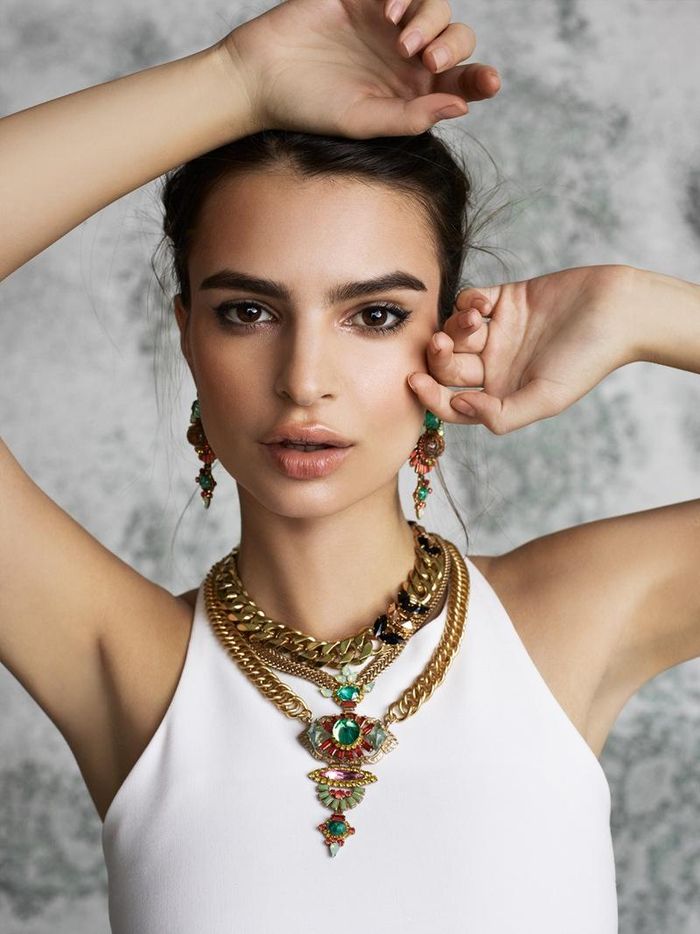 On June 11, the newspaper’s paparazzi BackGrid Photograph of Emily Ratajkowski and her husband returning to New York after a trip to celebrate the female model’s 30th birthday. Recently, America’s long legs were welcomed by reporters because although she had not given birth for a long time, she recovered quickly. However, in the post on June 8, Ratajkowski was criticized by many people (mostly breastfeeding mothers) when he used one hand to hold his 3-month-old son while showing off his figure in front of the camera with a patterned swimsuit. summer. She was scolded as a mother who was busy living in a virtual life, holding a strange child like carrying an item that made the boy’s head tilted. Ratajkowski has now locked comments for this photo. Love to show off my body Emily Ratajkowski shows off her figure in Italy, Emily Ratajkowski looks sexy in a very low-cut pink bikini, Emily Ratajkowski poses to show off her butt … A series of newspaper headlines like this often appear on Harper’s Bazaar, Cosmopolitan, Daily Mail and many other newspapers. “Emily Ratajkowski shows off her body” (Emily shows off her body) became a hot keyword on Google, when it produced 33.5 million results in just 0.44 seconds. That proves that she is specially exploited by the media for her appearance. Because, whenever appearing anywhere, Ratajkowski still promotes open style. Cut-out dress, high slit, deep neck design associated with the long-legged image born in 1991. After getting married, she still pursues a dress mix that honors the liberal look. 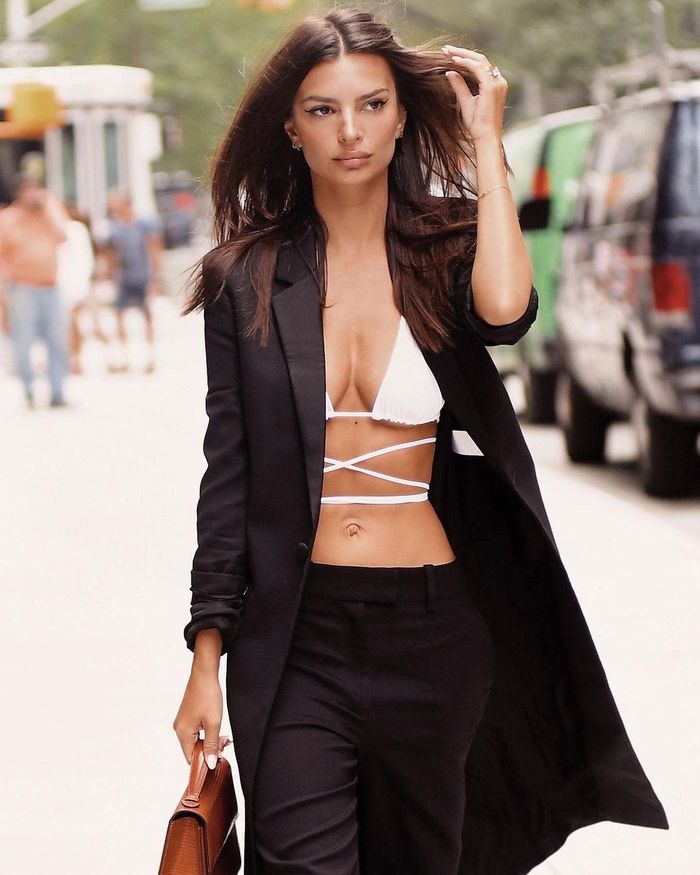 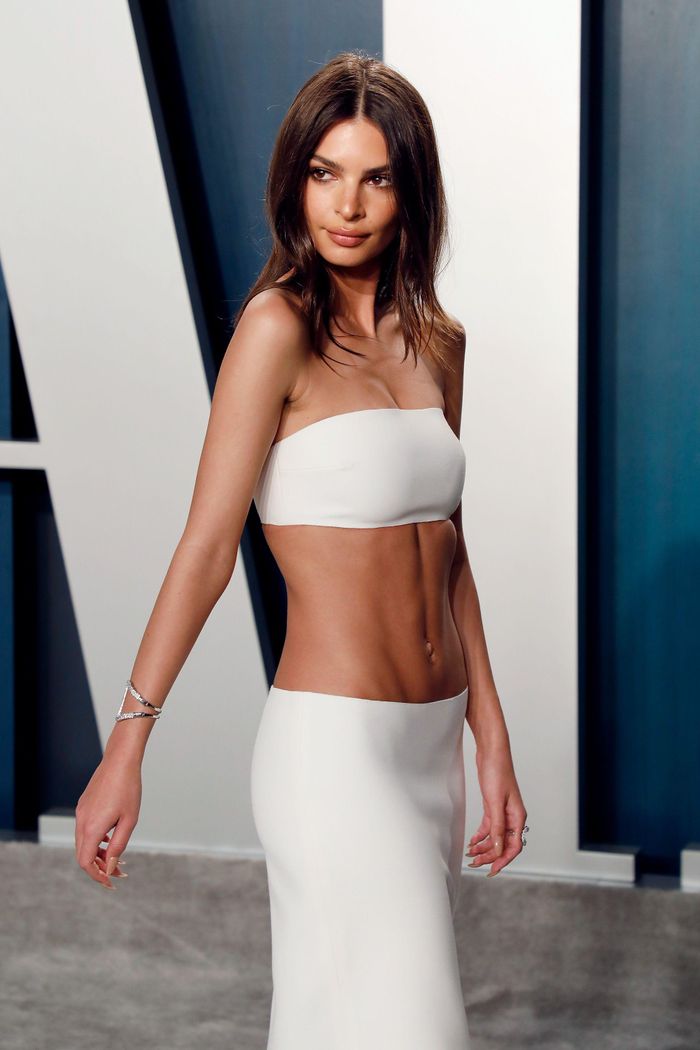 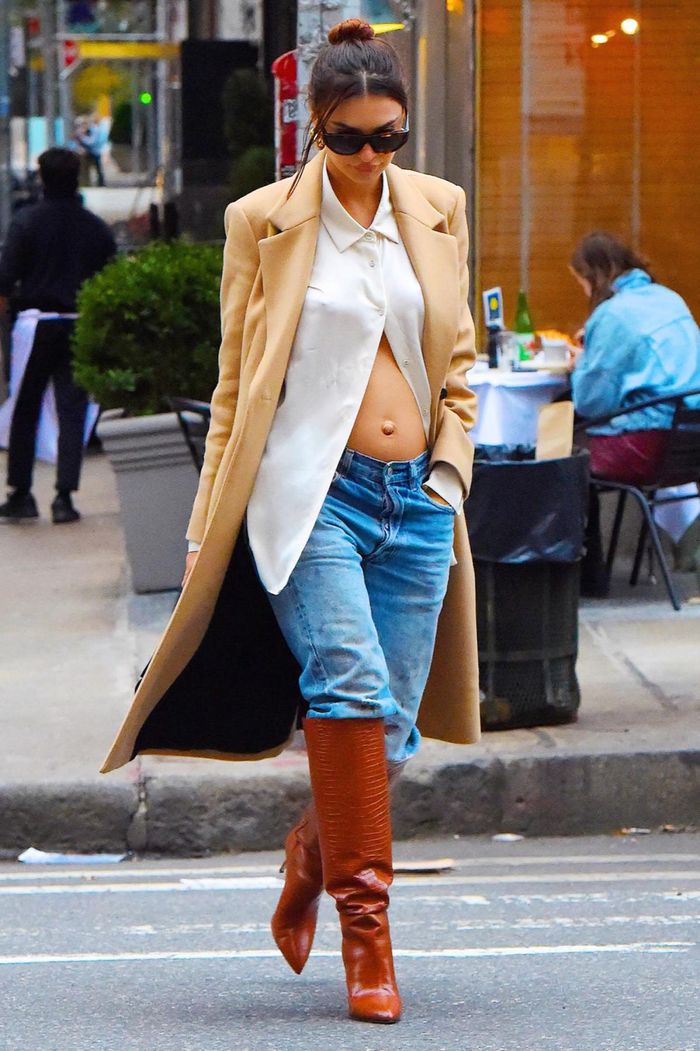 Female model dressed sexy even when pregnant. Photo: Elle Magazine. According to the Fashion Magazine , Ratajkowski likes to show off but is shy about compliments. She once exclaimed: “Do you really think I’m beautiful?” with a look of skepticism – as described by the reporter who interviewed Ratajkowski in April 2018. Ratajkowski mentioned above Instyle that she herself is not a gym professional, does not exercise too much to achieve her dream body, but is lucky to “have a naturally beautiful body”. The model said to eat comfortably, but limit foods rich in sugar at night. “Every day I go to Blacktop Coffee and buy a pastry called kouign-amann with black coffee. After that, lunch is usually a salad or a sandwich,” she said. Harper’s Bazaar . On March 20, after only 11 days of giving birth to her first child, she confidently showed off her waist without any excess fat. The audience questioned the veracity of Ratajkowski’s words. They think that it is very difficult to return to a slim waist after giving birth not long ago. Many others believe that Ratajkowski intentionally contradicts and is not open about his secret to keeping in shape so that the audience is always curious. From then on, her name will be hotter. “I don’t take negative words seriously” There is much controversy surrounding Emily Ratajkowski’s style. There are many opinions that the models themselves casually wear provocative lack of clothes, touching the border of objection. In the face of criticism, Ratajkowski usually doesn’t mind. “I’ve talked to other models. They mentioned how painful social media can be for us. You have many fans, but it’s not uncommon for people to hate you. How do you do that? deal with negative words? I don’t take compliments too seriously, so I don’t need to take negative statements too seriously. That will make it easier for you to ignore rude comments,” Ratajkowski said with Fashion Magazine . According to the Vogue , Ratajkowski enthusiastically supports women to beautify and show off their results. Because that’s their prerogative. And not only does she speak up for women’s voices, she also sometimes exposes the hidden corner behind the fashion industry – where women are often the most vulnerable. 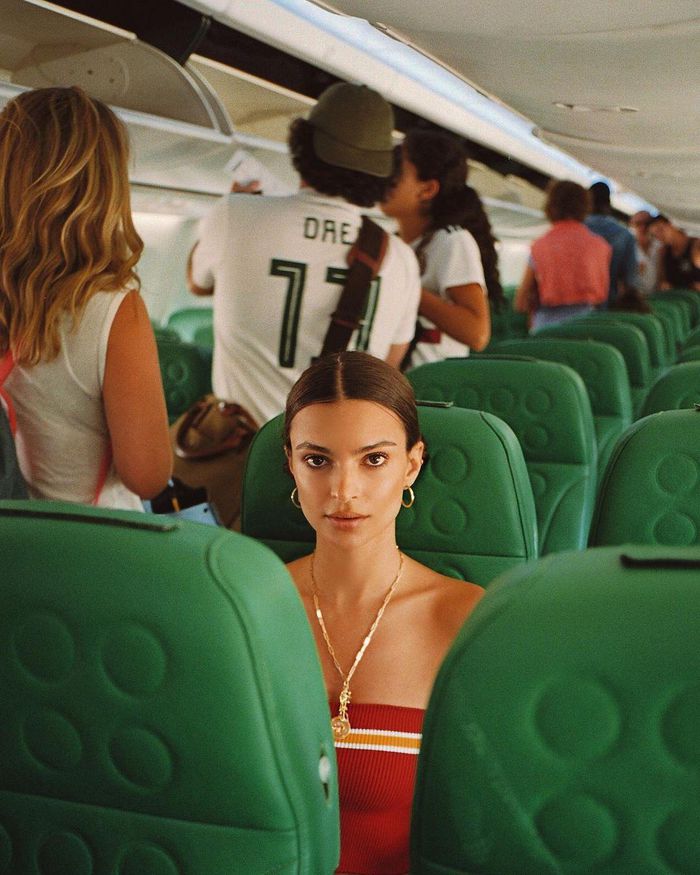 She was not engulfed by public criticism. Photo: Instagram emrata. Last year, Ratajkowski told the entire process of being attacked by photographer Jonathan Leder at her home in the Catskills, USA from May 2012, when she was 21 years old. The model opens up to the magazine New York : “He photographed me naked and in my underwear. While working, I drank quite a bit of red wine and got drunk at the end of the day. I was shivering coldly, huddled in blankets on the couch when Jonathan approached. He rubs rough jeans against my thighs. That feeling is really painful.” In Ratajkowski’s flashback, Leder was silent and clueless the next morning. “Waking up from the fear, I was offered coffee by Jonathan with an inexplicable calm,” she confided. Still making a lot of money The fashion industry has been trending for the past 5 years with the trend of “Social Media Modeling” of Harper’s Bazaar and “the Instagirl era” by Vogue , only famous girls from social network and use that to make money. Kendall Jenner, Gigi – Bella Hadid sisters are considered “supermodels of the 4.0 era”. Personal accounts with tens and hundreds of millions of followers have created an advantage for them to have a foothold on the catwalk, a position that will soon be promoted on the world fashion map. In fact, Emily Ratajkowski is also famous for building a visual strategy on Instagram. But later, her direction was aimed at advertising campaigns and commercial photography rather than shows. Nothing else, wearing revealing clothes and honoring one’s physical appearance is the recipe for Ratajkowski to develop and define the successful personal brand that it is today. 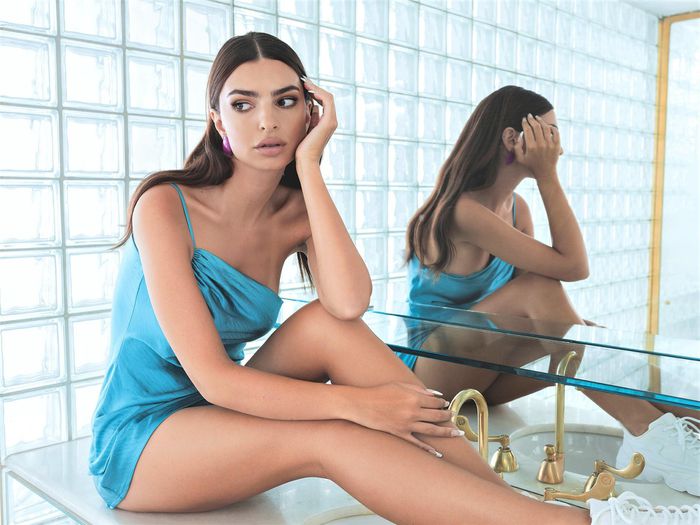 Her personal branding strategy was judged successful. Photo: Reddit. Emily Ratajkowski currently has 27.6 million followers on Instagram, soon to reach 28, then 30 million. Each of her posts attracts an average of 2 million likes and thousands of comments. According to the Hopperhq , the advertising price on Ratajkowski’s social media platform increased from $26,500 (2019) to $78,300 (2021) per post. She also proves attractive as an ambassador for prestigious fashion and beauty brands such as Loops, Kerastase Paris, Kérastase, Paco Rabanne… In 2017, the American long-legged founded her own swimwear brand Inamorata Woman and personally modeled ads, saving money on hiring outside names. People in the industry consider this a smart move for Ratajkowski, as she can both show off her body with her own designed swimwear models and earn a lot of money thanks to the growing business revenue. Celebrity Net Worth Ratajkowski’s net worth is estimated at more than $8 million. “Emily Ratajkowski was one of the first models to embrace the opportunity of ‘Instagram fame’, instead of the traditional path a model usually takes to achieve fame,” the site said.

The set of ‘playful’ photos of Coach Rap Viet and his...

Hà Trang - June 10, 2021 0
Wowy's grandmother wears youthful and trendy clothes that make the audience extremely excited and surprised because of her charisma no less than her famous...