Home Science Why is the Sun’s atmosphere hundreds of times hotter than its surface?

The Sun’s visible surface, or photosphere, is about 6,000°C. But a few thousand kilometers from it – a small distance when we consider the size of the Sun – the Sun’s atmosphere, and called the halo, which is hundreds of times hotter, up to a million degrees Celsius or higher. 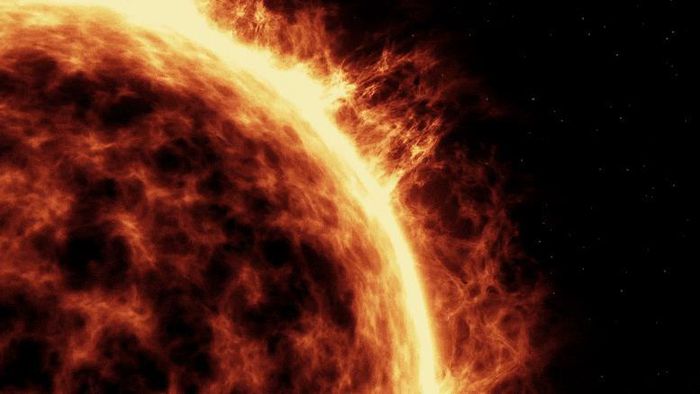 The Sun’s atmosphere can be as hot as 1 million degrees Celsius. This increase in temperature, despite the increased distance from the Sun’s primary energy source, has been observed in most stars. In 1942, Swedish scientist Hannes Alfvén hypothesized that the magnetizing waves of plasma could carry large amounts of energy along the Sun’s magnetic field from the interior to the corona, passing through the photosphere. before exploding with heat in the upper atmosphere of the Sun. This hypothesis has been tentatively accepted, but there is no evidence that these waves exist. Recent research by scientists finally confirms Alfvén’s nearly 80-year-old hypothesis and brings us one step closer to harnessing this high-energy phenomenon on Earth. The sun is made up almost entirely of plasma Halo problems have been around since the late 1930s, when the Swedish spectrographer Bengt Edlén and the German astrophysicist Walter Grotrian first observed phenomena in the sun’s corona that could only be observed. present if its temperature is a few million degrees Celsius. This represents temperatures up to 1,000 times hotter than the photosphere below it, which is the surface of the Sun that we can see from Earth. Estimating the heat of the photosphere has always been relatively simple: we simply measure the light reaching us from the Sun and compare it with spectral models that predict the temperature of the light source. Through decades of research, the temperature of the photosphere has always been estimated to be around 6,000°C. Edlén and Grotrian’s discovery that the Sun’s corona is much hotter than the photosphere – albeit farther from the core. of the Sun, its supreme source of energy – has given the scientific community a headache. Scientists looked at the properties of the Sun to explain this difference. The sun is made up almost entirely of plasma, which is a highly ionized gas that carries an electrical charge. The movement of this plasma in the convection zone – the upper part of the sun – generates enormous electric currents and strong magnetic fields. These magnetic fields are then pulled up from the Sun’s interior by convection, and enter its visible surface in the form of sunspots, which are clusters of magnetic fields that can form a variety of magnetic structures. differences in the Sun’s atmosphere. Alfvén reasoned that within the Sun’s magnetized plasma, any large movement of charged particles would perturb the magnetic field, creating waves that could carry enormous amounts of energy across vast distances. (from the surface of the Sun to its atmosphere). Heat travels along what is known as a flux tube from the sun before bursting into the corona, creating its high temperature. Measure the temperature of the Sun with an imaging spectrometer These magnetic plasma waves are now known as Alfvén waves, and the explanation for the heating of the circle led to Alfvén being awarded the 1970 Nobel Prize in Physics. The Interferometric Bidimetric Urban Spectrometer (IBIS) for imaging spectroscopy, installed at the Dunn Solar Telescope in the US state of New Mexico. This instrument has allowed researchers to make more detailed observations and measurements of the Sun. Combined with good observational conditions, advanced computer simulations, and the efforts of an international team of scientists from seven research institutions, they used IBIS to confirm the existence of waves for the first time. Alfvén in flux tubes from the sun. The researchers also expect more solar discoveries soon, thanks to new, groundbreaking missions and tools. The European Space Agency’s Solar Orbiter satellite is currently in orbit around the Sun, providing images and making measurements of the star’s unexplored polar regions. The launch of the new high-performance Solar telescope is also expected to enhance our observation of the Sun from Earth.

Dancer Quang Dang created the dance ‘The pangolin is still the...

Thanh Xuân - May 13, 2021 0
The dance calling for pangolin protection, choreographed by dancer Quang Dang, who received the attention of the international community by the 2020 Global Fever...