The traditional craft of raking mussels has been the ‘fishing rod’ of many families in Ben Hen village, Truong Son commune, Duc Tho district (Ha Tinh province) for more than 300 years.
The whole village goes backwards

Here, mussels are not only a specialty dish with a famous brand throughout the country, but thanks to that, people have a fairly stable income. Every day, thanks to mussels, a section of La River in Ben Hen village is as bustling as a miniature market. Present in Ben Hen village, witnessing the busy buying and selling scene, besides in the village, the stoves boiling mussels smoke and the aroma from boiled mussels spreads throughout the whole area. 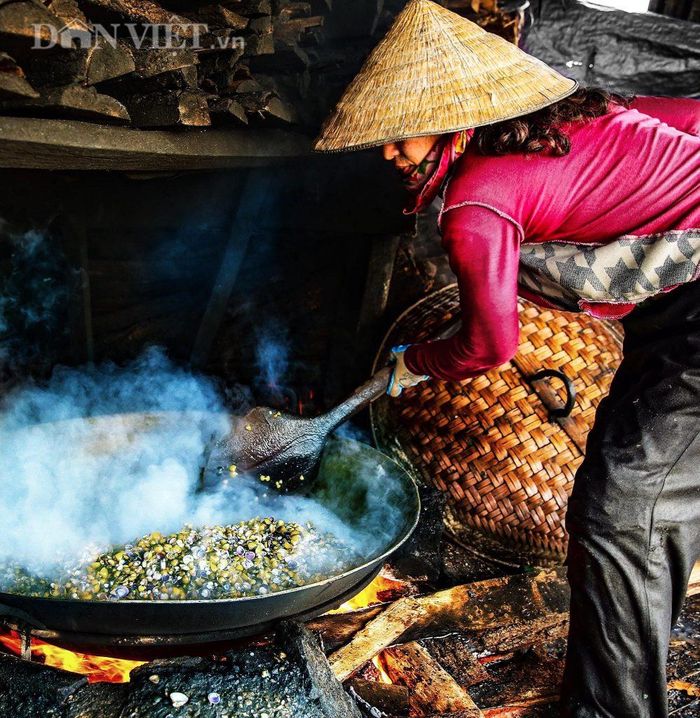 The smokey mussels boiling stoves in Ben Hen Boiling mussels in a hut, Nguyen Thi Hoa, from Ben Hen village, Truong Son commune, Duc Tho district (Ha Tinh), said: “I don’t know when this profession was formed, only know that generations People in Ben Hen village, when born and grow up, all follow each other in the profession of raking mussels and boiling mussels. All expenses in life, building houses, buying supplies, taking care of their children and grandchildren’s education, all depend on income from mussel farming. According to Ms. Hoa, in the past, mussel making was difficult, very hard, all day long, husband and wife, brothers and sisters were stuck in the river, just worried about making enough to eat, did not have enough money, because at that time the price of mussels was too cheap. About 10 years ago, when mussels became a clean food, a popular specialty, the price was high, so the mussel industry in Ben Hen is growing strongly and bringing a good source of income. determined for the people. 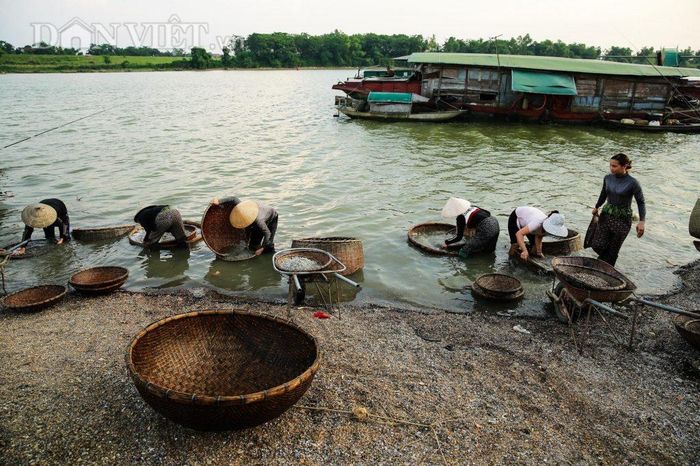 Ben Hen is growing stronger and bringing a fairly stable source of income The reason is called the profession “going backward” because in the past, mussel making was not as modern as it is now, to catch mussels, people had to use a rake with a rectangular trough, 1-1.5m long handle to rake. The rake just went backwards and shook it to treat the mussels. Now, just sitting on a motorboat, plugging a rake into the sand and then running the engine along the river a few times, there are dozens of kilograms of mussels. Because the value of mussels is high and the mussels in Ben Hen have affirmed their brand, many traders have come to the place to buy in large quantities and then transport them everywhere for consumption. Thanks to that, mussel workers do not have to worry about output, raking as much as they can consume. The mussel fishing season lasts almost all year round, but the peak season and the most mussels are from January to June of the lunar calendar. 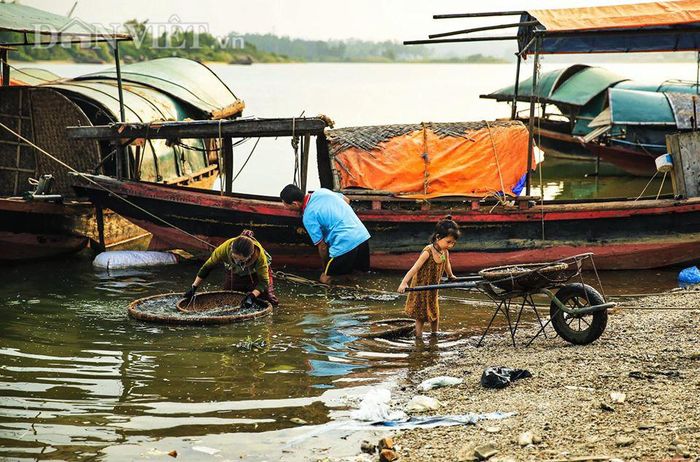 Ben Hen village currently has 150 households living by raking mussels – a job “going backwards”. Ben Hen village currently has 150 households living by raking mussels – a job that “goes backward”, sunbathing with his back, his face in the water all day, and working hard at night picking and washing mussels. Although it is less difficult than before, the job of making mussels requires health, perseverance and hard work. After scraping, all mussels are used up, the shells are gathered and calcined into lime for construction, agricultural production or finely milled as food for chickens and ducks; mussel intestine used to process dishes; Mussels are used to make soup. Mr. Nguyen Quang Tuan, a resident of Ben Hen told reporters about the process of making mussels. He said: “We men, who are healthy, go on a motorboat to rake mussels on the river, on average 2-3 people per boat. And women stay at home to soak mussels, boil mussels, treat mussels clean… Every day, work usually starts from 2-3 am until late afternoon”. Mussels enrich the whole village Sharing with reporters, Ms. Nguyen Thi Sen, who has been involved in this profession for a long time, said: “Mussels are “a blessing from heaven” given to these villagers, my whole family has been working as mussel rakes for 4 generations on the La River. I also ate mussels but grew up, so even though I worked hard, I still had to keep the traditional profession of the village, “said Ms. Sen. 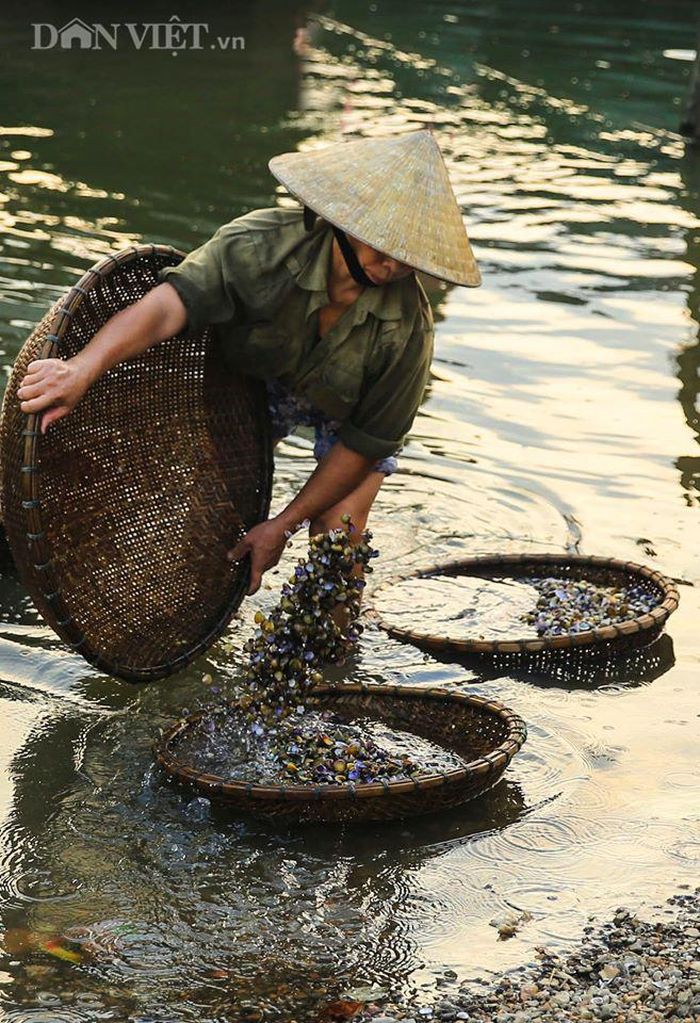 Currently, mussels here are considered a clean specialty Ms. Nguyen Thi Hoa, a resident of Hen wharf confided: “In the past, every day my husband and I just needed to go along the La River to rake a few tons of mussels, but now the mussel production is increasingly depleted, so people have to overcome kilometers along the river Ngan Sau, Ngan Pho or upstream Ben Thuy bridge (Vinh City) to bring back mussels. According to Mr. Tuan, in the peak season, there are boats raking more than 1 ton of mussels/day, the remaining average is 300-600kg/boat. The average income from making mussels is about 500,000 – 1 million VND/house/day. Compared to other occupations, this is the profession that is bringing in the highest and most stable income, creating many jobs for people… Especially, mussels here are now considered a clean specialty with economic value. high so people are very secure to stick to the job.

4 famous Vietnamese models in the world

P.V. - May 14, 2021 0
Ajinomoto Vietnam Company has just launched a premium multi-purpose seasoning powder product 'AJI-NO-MOTO' UP, which helps to cook delicious and easy dishes, highlighting the...