‘Murder Mystery’ is not a new movie, but it is enough to bring joyful moments to viewers during the quarantine period at home. 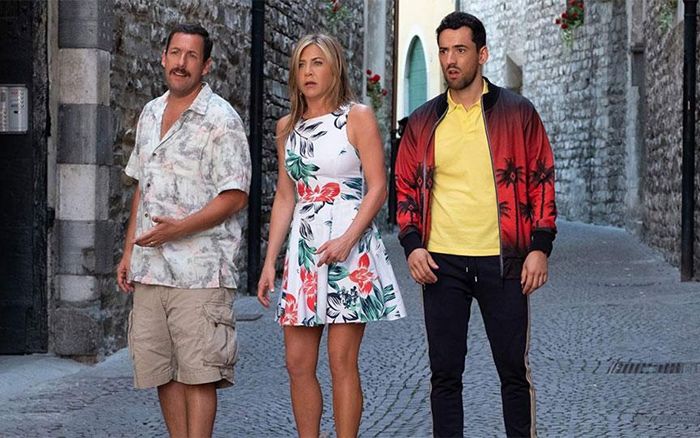 Scenes from the movie “Mystery Murder”. Photo: The New Daily. “Murder Mystery” is not a new movie, but it is enough to bring joyful moments to viewers during the quarantine period at home. “Murder Mystery” with two names Adam Sandler and Jennifer Aniston is enough to pull viewers, but names are not enough, but because these two veteran actors have a great ability to juggle each other in every movie. comedy in which they participate. Returning to the film, which initially revolves around the seemingly boring life of a very ordinary couple in New York. Husband Nick Spitz is an ordinary police patrol in New York, and his wife Audrey is a hairdresser, mainly listening to the “melon trade” of the ladies, and especially loved. Detective book. With the couple’s wedding anniversary coming up, Audrey’s biggest wish is to take a trip to Europe. The policeman’s weakness, unthinkable, is shooting. It was because of the wrong shot that he failed to graduate from the Police Academy three times in the exam, and in the end could only stop at the position of a patrol policeman, but could not become a criminal detective as a form of crime. the model that both he and his wife dream of. The meager salary of civil servants, along with his wife’s dream, prompted him to find ways and finally, thanks to the help of a close colleague, he also booked a “reluctant” trip to Europe. Europe for the wife. But both husband and wife could not have imagined that this would be a fateful trip that they would never forget for the rest of their lives. The trip began with the acquaintance between his wife Audrey and the handsome handsome Charles Cavendish, a billionaire, generously invited both to stay at his yacht that will set sail and anchor off the coast of France. . However, this billionaire guy is not the owner of the yacht, but his uncle, the old billionaire Malcolm Quince, an old fox who filters the core and is experienced in both the market and the way of looking at people. Malcolm Quince is also the one who stole Suzi Nakamura, Charles Cavendish’s ex-fiancée, and he is about to throw an engagement party with Suzi herself on the yacht. Also present on the yacht to attend the party were guests who were more or less related or had an interest in the Malcolm Quince family. It is Tobey – the only son who has the right to inherit the $ 70 billion fortune of Malcolm Quince, hot actress Grace Ballard, Colonel Ulenga and his giant bodyguard Sergei, Maharajah – another rich man with experience. joint venture with Malcolm Quince, and handsome young racer Juan Carlos. And right at the beginning of the party, Malcolm Quince suddenly announced that this was also the party to announce his inheritance of his huge fortune. It all started here, when the lights suddenly went out and gunshots rang out, and when the light came back they all found Malcolm Quince lying motionless in the middle of the room, with a knife in his chest. . The French police arrived, and after questioning everyone present at the scene, all suspicious leads turned to the couple Nick and Audrey Spitz. The race to find the culprit and also wash the injustice for himself of the patrolman policeman and the hairdresser begins… The story is cleverly integrated between crime detective and humor, with the skillful and graceful juggling of Adam Sandler and Jennifer Aniston and unexpected twists that make the audience both thrilled and excited. Enjoy the funny, witty scenes in the movie. “Murder Mystery” was originally scheduled to feature Charlize Theron, but she ended up not participating. The film is set in the sea and beautiful buildings, shot in Montréal (France) and Milan (Italy). The digital film was released to a global audience in mid-2019, and soon after, according to Netflix figures, reached 30.9 million households in the first 72 hours of its online release. . Less than a month later, this number has more than doubled, to 73 million households, making “Mystery Murder” the highest-viewed film by Adam Sandler on digital platforms. However, the film did not receive high reviews from critics. Vote on film review site Rotten Tomatoes is only 44%, with an average rating of 4.7/10. Variety called the film “flashy like jewels,” but Aniston was glittering like the real thing. And the Hollywood Reporter called the film just a story “generally as dull as its title”. However, with a goal of light entertainment at home during the epidemic season, “Mystery Murder” deserves to be the choice for audiences this summer.

Anh Phan - June 16, 2021 0
With his outstanding height, actor Ian Whyte was born for the roles of mystical creatures and alien monsters on the screen. Born and raised...