Home Cuisine Rivers and the profession of ‘uncle’

Although fish and shrimp resources are no longer as rich as in the past, fishermen in the upstream area of ​​the Tien River still persist with the profession of ‘aunt and uncle’ (fishing, netting) every day as a promise to stick with the river. .
“Prepare your tools to go to the river again, uncle?”, I asked. Uncle Tho (Tan Chau town, An Giang province) is mending the net, smiling lightly: “I hope to have enough to eat today.”

For many years in a row, fishing and netting activities of people in the West are no longer as exciting as before. What can I say, when the water does not jump from the shore, fish and shrimp from upstream cannot follow the current but return. People had to look forward to the flood season in weariness. Uncle Tho has more than 30 years of fishing and netting on the Tien River. He is considered a master who knows the river and has the most experience in catching fish in the area. He knows each type of bait is specific to a certain type of fish, where there is a whirlpool and what fish to use the appropriate catcher. He is also a witness to all the changes on the river – where he and many other fishermen find a way to make a living, from the beginning of their career to the present. In the past, at the headwaters of the Tien River, the two banks of Tan Chau town and Hong Ngu town, almost always crowded with boats to catch fish. The most exciting is still in the floating season, when the spirit fish come from upstream, fishing activities not only take place during the day, but the river also shimmers with the lights of boats and boats to catch fish at night. Groups of people work together to pull nets and pour each batch of spirit fish onto the boat to be transported to the shore in time for buyers to make fish sauce and cook fish sauce. Or sometimes, just caught a mallet, a cotton ball, etc., people sell it right on the boat. Thanks to that, the whole river seems to be always bustling and bustling. 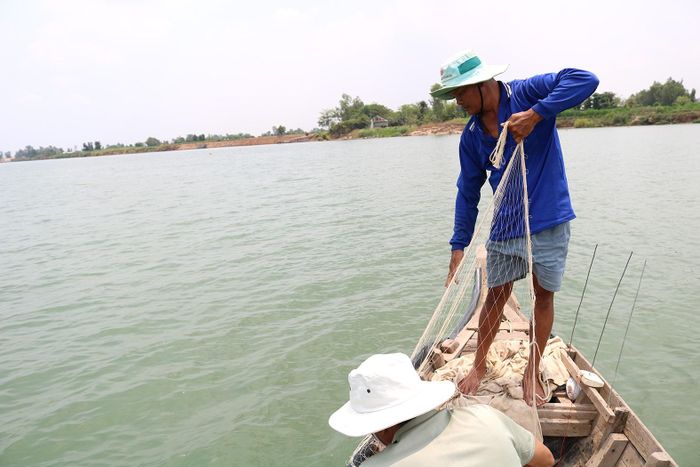 Prepare nets to catch fish “Just every time the fish is thrown out, the fish sticks from the lead up to the top of the net, unable to remove it in time. And every time we unload the scrub to catch fish, I say it’s as fun as the festival,” said Mr. Uncle Tho continued: “But that was in the past, when it was far away, there were no more fish in the river.” Mr. Quy (35 years old), a fisherman on the bank of Tan Chau landslide, also joked: “One day, he hit a catch of big pangasius and snakehead fish. I knew right away that it wasn’t river fish, but fish that escaped from the rafts, but now it’s hard to catch such big fish.” A few years ago, because they could not bear with a moderate life, many fishermen decided to sell all their boats and canoes to take their families to Binh Duong to find a new job. Uncle Tho and Quy also went to Ho Chi Minh City to find a way to make a living. But soon, they returned to their profession, to the river… As something unknown, always associated them with this profession of lowering silver. “When I’m lucky, I can catch some cotton balls, I bring them down to the town market to sell them for a good price. Any unlucky meal is enough for 2 meals. Now I can’t catch fish to get rich like before, but I’m never hungry when I’m hungry,” said Mr. Tho optimistically. Then every day twice a day, they throw the motorboat out to the river, visit the nets, some pre-ordered fishing boats and then return with small achievements. The profession of “aunt and uncle” to them is not simply a profession, but it also seems to be a career. The river with them, is not only a place to make a living but also a place of affection.