Home Tech The “Super Red Moon” is here! The day after tomorrow, the total...

On May 26, the only total lunar eclipse in my country this year will be staged from west to east in the sky. It is understood that this is the largest full moon this year. At the same time, there will be a total lunar eclipse (red moon) and a “super moon” on the sky, “superimposed” to form a rare celestial phenomenon of “super red moon”. Fortunately, this spectacle can be seen in most parts of our country, and if you can’t appreciate it due to weather and other reasons, you may have to wait another year. 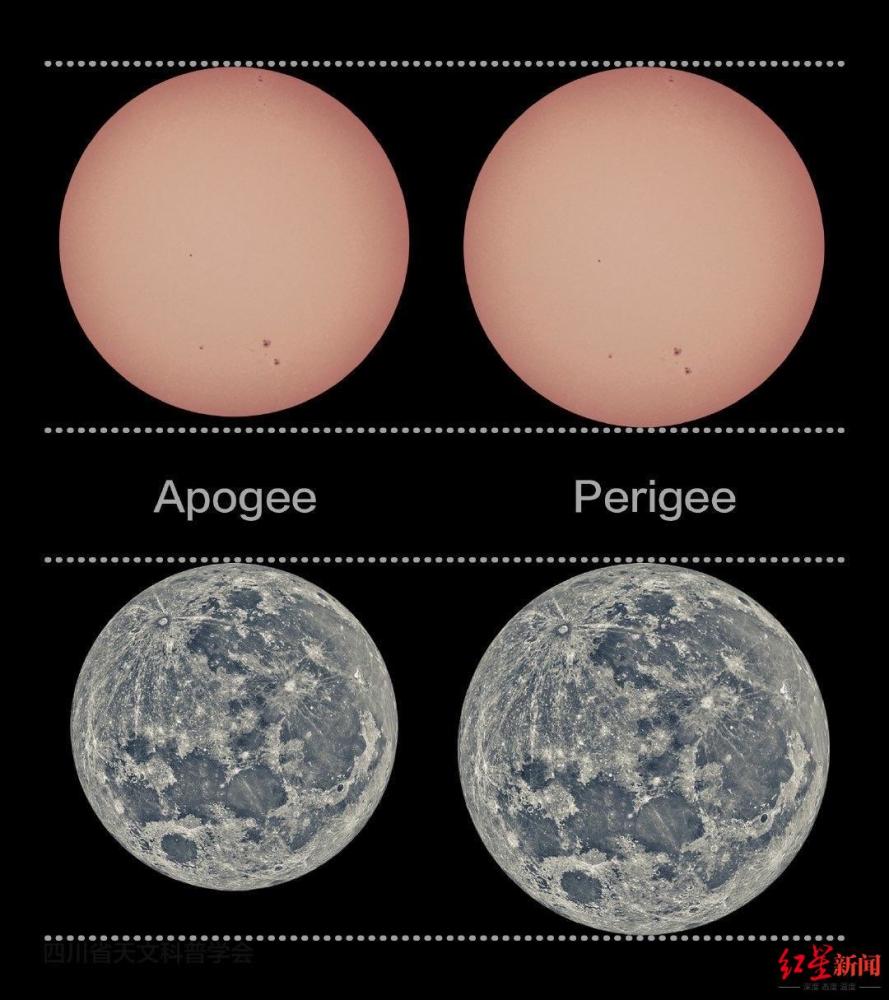 Super moon So, what is a “super moon”, a total lunar eclipse? Where can I see the astronomical wonders in the whole country? Can you see it in Chengdu and in Sichuan? In this regard, Red Star News interviewed Qin Jiajie, deputy secretary general of the Sichuan Astronomical Popular Science Society, and Liao Kai, director of the Society, to answer the “super moon” issues for everyone! Red Star News: What is a “super moon”? Liao Kai: The super moon refers to the near-point synodic moon that occurs at the same time as the full moon (or new moon) and the perigee month. Since the new moon is not visible, it is generally expected that the moon is a full moon. When the moon is in the full moon period, and the moon moves near the perigee at this moment, it can be called a super moon. It is more scientific and accurate to name the “super moon” as the perigee full moon if it is defined by its moon phase and moving position. 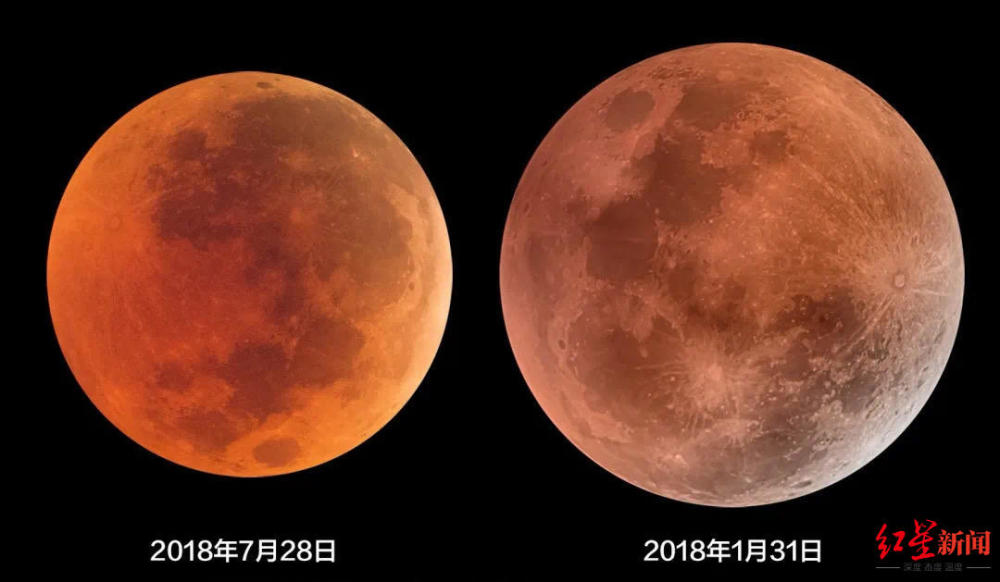 A comparison between a super moon in the eclipse phase and a non-perigee full moon photo by Liao Kai The average distance between the earth and the moon is 384,400 kilometers. This time the “super moon” is only about 357,000 kilometers away from the ground, which can be said to be very close. Based on the basic perspective principle of near, large, and small, the apparent diameter of the “super moon” will be more than average. The apparent diameter of the full moon is about 12% larger on average. However, the phase of the moon gradually changes from the new moon to the full moon. By the day of the full moon, it is not easy to detect this 12% difference with the naked eye. Red Star News: Can you talk in detail about what a “total lunar eclipse” is? Liao Kai: When the moon moves into the shadow of the earth, the part that could be illuminated by sunlight cannot be illuminated by direct sunlight, so that observers located on the earth can see the astronomical phenomenon of the moon experiencing roundness in a short period of time. 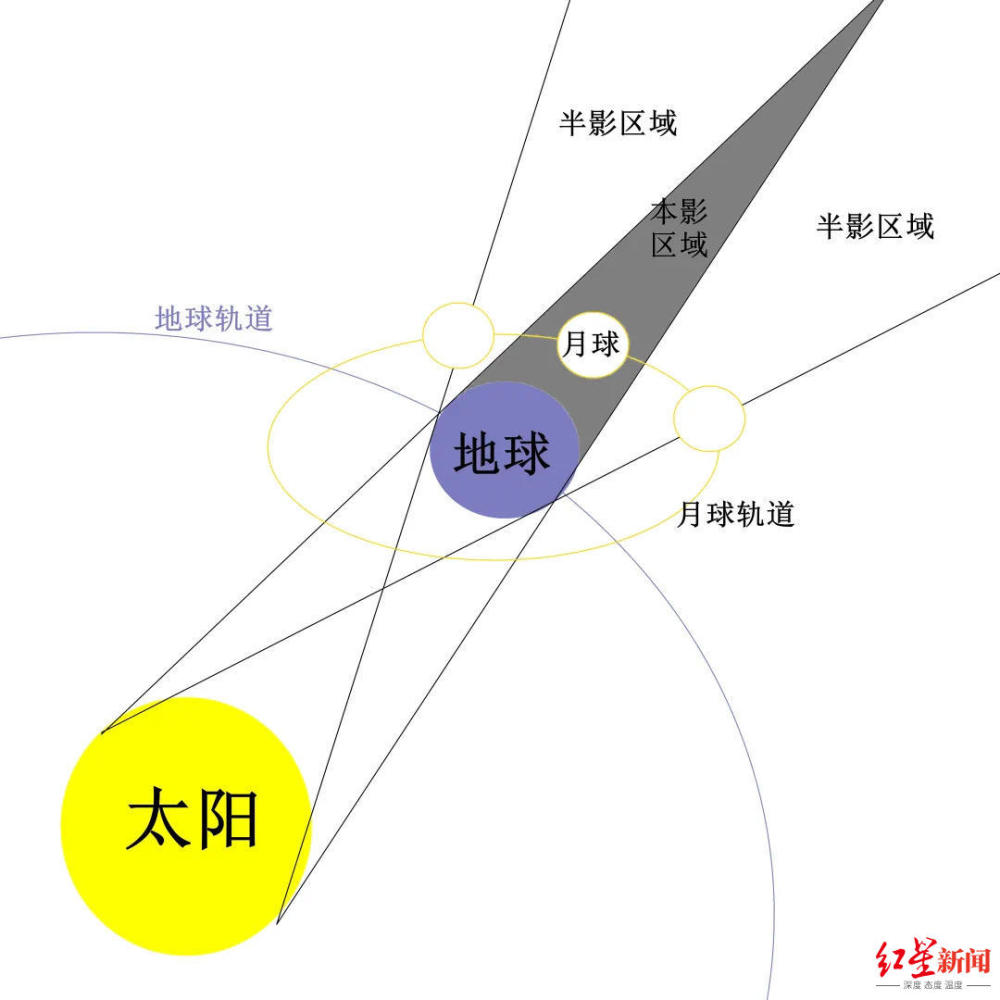 Principle of total lunar eclipse The total lunar eclipse can be divided into the following main stages: 1. First loss: the moment when the moon enters the earth’s umbra from the east edge, and it cuts out of the earth’s umbra for the first time. 2. Eclipse: the moment when the moon completely enters the umbra of the earth and cuts inwardly with the umbra of the earth for the first time. 3. Extreme eclipse: the moment when the center of the moon’s surface is closest to the center of the earth’s umbra, at this time the surface of the moon before and after is copper or dark red. 4. Birth: the moment when the moon begins to leave the earth’s umbra, and inscribes with the earth’s umbra for the second time. 5. Complex circle: the moment when the moon leaves the umbra of the earth from the west edge, and circumscribes the umbra of the earth for the second time. Focus Remember the time points of the 7 phases of the total lunar eclipse that night: The penumbra eclipse starts at 16:46 (the moon starts to touch the penumbra of the earth) The first loss is 17:45 (the moon just touched the earth’s umbra) The eclipse is at 19:09 (the moon happens to all enter the earth’s umbra) The eclipse is 19:19 (the center of the moon is closest to the center of the earth shadow), and the maximum eclipse score is 1.015 The birth time is 19:28 (the moment the moon emerges from the earth’s umbra) The recirculation time is 20:53 (the moon just completely separates from the earth’s umbra) The penumbra eclipse ends at 21:51 (the moon happens to be completely separated from the penumbra of the earth) Therefore, as long as the weather is good, you can see the total lunar eclipse without waiting too late that day. According to the Guangzhou Wuyang Planetarium, when a total lunar eclipse occurs on the evening of May 26, there will also be a rare celestial phenomenon that will be staged in conjunction with a total lunar eclipse (red moon) and a super moon. When the moon enters the umbra of the earth, the public can witness the moon showing a bronze color. This is what people call the “red moon” (because the moon orbits the earth from west to east, the eastern edge of the moon enters the shadow of the earth first, and because of sunlight There are seven colors of “red, orange, yellow, green, blue, blue and purple”. Red light has the longest wavelength and has the strongest ability to penetrate the atmosphere or refraction and scatter, so the moon appears red. The whole lunar eclipse was in New Zealand in Oceania. It can be seen that a total lunar eclipse (red moon) can be seen in the eastern part of China, but the moon height is slightly lower and the cloud cover is slightly thicker. A partial lunar eclipse can be seen in the western part of China. It is reported that if you cannot appreciate the total lunar eclipse and the super moon due to weather and other reasons, you may have to wait another year, and you will be able to see the super moon again in the early morning of July 14, 2022, on November 8, 2022. It is possible that a total lunar eclipse will appear again. Red Star News: On May 26, where will the “Super Red Moon” be visible in my country? Is there a high probability of observation in Sichuan and Chengdu? Qin Jiajie: On May 26th, the weather in most parts of Northeast, Northwest, and North China was fine. The weather in South China was mainly from sunny to cloudy, which was good for watching the lunar eclipse, while the weather in Southwest, Central and East China was rainy and not good for viewing. Lunar eclipse. As far as Sichuan is concerned, the weather in southern Sichuan is dominated by cloudy and overcast weather. Among them, there are relatively few clouds in the sky near Zigong, and it is possible to see colorful clouds chasing the moon; in northern Sichuan, the sky is mainly cloudy, and the sky is covered by clouds. The moon is chased in the middle; the eastern Sichuan region is mainly cloudy, which is not conducive to watching the lunar eclipse; while in the past, the western Sichuan plateau and the Panxi plateau, which were good for viewing the moon, were cloudy with rain and snow in most areas that day. Conducive to viewing the moon. As far as Chengdu is concerned, most of Chengdu that day was mainly cloudy in the underworld, and the sky was covered by clouds. Whether you can watch it depends on luck, and you can ask for the moon in the cracks of the clouds. It is reported that at 19:00 on the same day, Red Star News will also cooperate with the Sichuan Astronomical Science Society to bring you a live broadcast in Chengdu. Would you like to see the true face of the year’s largest full moon? Want to listen to astronomical experts live answers? Please remember to adjust the alarm clock and follow it in real time! Red Star News reporter Zhang Ling, according to the interviewee Edit Zhang Li (Download Red Star News, there will be prizes for newspaper materials!)

Academician writes that academician’s scientific spirit is passed down from generation...